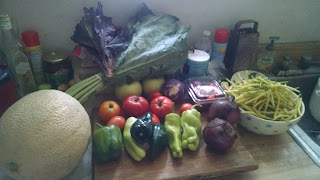 We are entering the high eating season of the year.

You pass the September Ember Days, and you are into it!

This morning for our St. Anthony's coffee hour I made two pumpkin delicacies. I am sorry if I was jumping the gun a little but I could not help it! I made a pumpkin wreath, one of those big coffee cakes I make with yeast, and I also made a Bundt cake I called Buttercup Rum Cake. There is this amazing recipe, Whiskey Squash Cake, which was the first successful Bundt cake I made a couple of months ago. I riff on it now and this version used rum instead of whiskey, as well as deep orange Buttercup squash.

I assume it was good because it vanished pretty quick!

I have been having a good time with the farm I joined, this CSA. This is the same ol' organic farm I used to belong to, Porter Farms. I just do not remember having as much fun with it then as I have been having this year.

The deal is, they deliver to the office. And so every week, on the appointed day, at the appointed hour, all of us are going downstairs and collecting these bags of produce. It is hard not to smile when you are toting this big bag with collard greens sticking out of it and so it is always a bright and cheery day.

I took the picture up above of one share. That was especially heavy because of the cantaloupe which was like a bowling ball! But it was so sweet and good, worth the long haul across the parking lot. 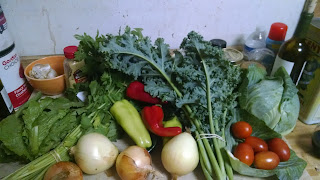 I love how the farm says one share does for four people, or for two vegetarians. That Sept. 7 share, I think I ate it pretty much single-handedly in two days! The cantaloupe on the other hand lasted us a week. We ate every bit of it.

This current share included an array of peppers which, I used them for this Mexican cheese soup I made for the coffee hour. The coffee hour sees a lot of the vegetables. A few weeks ago I made yummy white bean soup with greens from the farm.

Bring on the fall eating season.