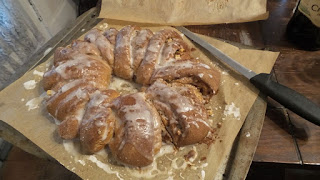 This is the coffee wreath I brought to the St. Anthony's coffee hour this morning.

Despite the fact that I made it kind of on the fly, in between going to a wedding, going to the reception, and taking care of other business. .. it came out well!

The same cannot be said of this week's Bundt cake.

This was a lemon Bundt. Everything was perfect except for it did not come out of the pan. Half of it was in crumbles.

And may I point out this is the second time this Bundt pan has stuck it to me. Third time. This was the pan that soured me on Bundt cakes to begin with, now that I think about it. The cake stuck. Then it stuck again a couple of weeks ago, though not so badly.

Strike three, you're out! I personally took that pan out to the garbage.

A sorry end to a pan I had greeted with such joy. Maybe it was my fault. Maybe when I made my first cake I scratched it too much or something. Well, whatever.

I panned that pan!

So for now I will stick with the Kugelhopf pan that worked well for me.

As far as the lemon cake, half of it was served at the St. Anthony's coffee hour. It was gone in 60 seconds, rivaled only by these gooey brownies someone brought and the Monsignor's manicotti.

I brought the other half of the cake home and am going to do something with it. Cake pops, perhaps? Bread pudding? I am leaning toward cake pops because I have never made them. Lemon flavored cake pops, yummy!

As a result of the lemon of a cake pan.