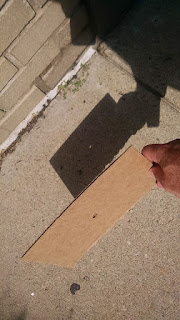 As I just put on Twitter, we watched the eclipse old school at The Buffalo News. Scott Scanlon, my neighboring colleague in the newsroom, remembered the old Boy Scout trick where you poke a hole in the cardboard.

That is the eclipse pictured at left!

We were all excited bounding down the stairs to give it a try. Scott is the editor of Refresh, the health section, which explains why he takes the stairs and also why he views the eclipse safely with a piece of cardboard.

Outside we found almost everyone else in the office already out there. Of course the really cool people were the people who stayed inside at their desks and didn't care at all. However I have never attempted to be cool and that has served me well in life.

A few eclipse statistics I loved...

Another is that when was the last eclipse like this, 1919? Somewhere around then.

Leonard Pennario went through his whole life without seeing such a thing!

It got Howard and me thinking about other eclipses in history and one thing we pondered was whether there was an eclipse mentioned in the Bible anywhere. I thought of the Crucifixion when darkness descended over the land. And the curtain in the Tabernacle was torn from top to bottom, and the dead came out of their graves and walked around and were seen by many. I am sorry, once I start with this, I cannot stop!

That could have been an eclipse, however, if it were, it would be a lunar eclipse, not a solar. There are scholars who have figured that out. And apparently there was a lunar eclipse in 33 A.D. I will have to look into this further.

Meanwhile, the big question is:

When eclipses occurred in Biblical times, would someone have been there with a piece of papyrus with a hole poked in it?

It is undoubtedly so!
Posted by Mary Kunz Goldman on August 21, 2017