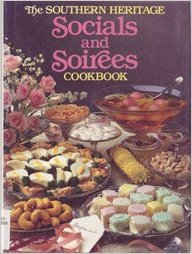 Can you stand another cookbook? 'Cause I am going to throw one at you.

For church coffee hour today I made gingersnaps out of my Southern Heritage Socials and Soirees Cookbook.

This book is amazing. It is not old. It was published by Southern Living in 1985. But saints alive! The gingersnap recipe was on a page next to a picture of the wife of Jefferson Davis. An engraving of old Jeff himself was on the opposite page, along with the most marvelous recipe for something called Jeff Davis Punch.

This is something we just have to make. Some time, some where. Here are the ingredients:

Anyone want to come over for some Jeff Davis ... 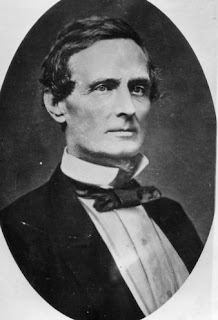 I cannot imagine combining red wine and brandy and rum in these giant quantities but there is a first time for everything.

I actually was in Jeff Davis' house. It was in Mobile, Ala., if memory serves me. He seemed a learned man, as men were in the 19th century. There were all kinds of books in Greek and Latin. Had he lived in modern times he would have had Leonard Pennario records.

The greatest thing about the punch is the yield. I love that this book assumes we lead lives that will on occasion require seven gallons of wildly alcoholic punch.

Well, as it happens I just bought a beautiful punch bowl a few months ago at an estate sale.

So, you never know!

Would go well at Christmas Caroling rehearsals, or heck, put it in big wooden bowl for when we go a'wassailin'!