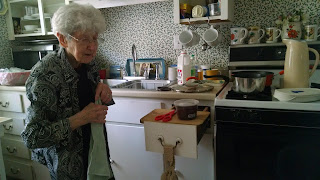 I celebrated the recent 86-degree day by baking biscotti at Dorothy's with my friend Lizzie.

There is nothing like slaving over a hot stove on the first warm day! That way you double the dose. The windows were open in Dorothy's tiny kitchen but the curtains barely stirred.

Biscotti are the hottest thing in the world to make because they bake twice. First you mix up the dough, which, Dorothy added Christian Brothers brandy.... 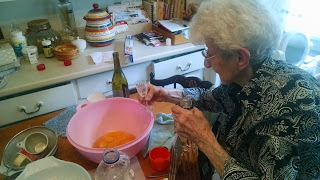 ... then you form them into loaves, and sprinkle them with sesame seeds .... 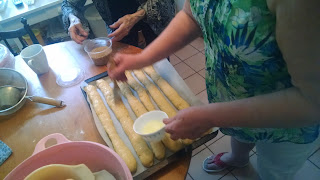 ... and bake them. Then they come out of the oven when they are just right! We had to check them multiple times. And then you slice them on the diagonal, and lay the slices on their sides .... 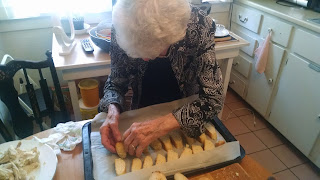 Not only that but in the second baking, they have to be flipped half way through. I would take a tray out and Dorothy would inspect it and either tell me they were ready to be flipped or they were not. If they were not, back into the oven they would go and a minute later we would have to check them again. Another blast of heat from the oven, more heat as Dorothy peers at the biscotti, then back it would go. Or, if they were ready to be flipped, I would have to flip them one by one. With about 30 biscotti on each hot tray that would take a little while.

Once they were flipped the process would repeat except ratcheted up to a higher level because at this point Dorothy worried about them burning. They would have to be checked that much more religiously.

Speaking of religion I am convinced the only thing that kept me from dying as this ordeal went on were all the pictures of Father Baker and Padre Pio that surrounded me in Dorothy's kitchen. You will work hard in this kitchen but you will not die. 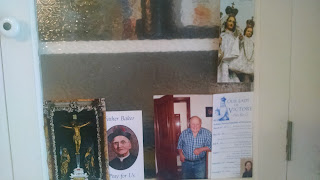 Luckily, because Lizzie said I was changing color!!

All is well that ends well and the biscotti came out delicious. We helped Dorothy clean up... 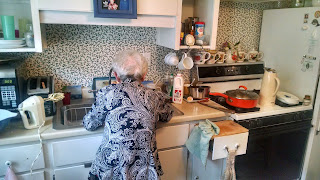 ... and then we viewed paintings that Dorothy has done over the years, and we talked with Dorothy's sister Clara who was sewing in the other room. And then we all ate dinner and toasted our success.

Aren't you dying for these biscotti now? They may be tasted Sunday at the coffee hour at St. Anthony's in downtown Buffalo, after our 9 a.m. Tridentine Mass.

They are our souvenir of that one warm day!