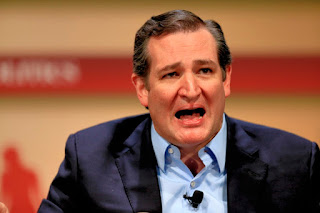 This morning I woke up and went, "Yikes!"

Because of all people to dream about, I dreamed about Ted Cruz.

I dreamed we were friends!

I do not even like Ted Cruz. However I do not particularly like Barack Obama either and that did not stop me from dreaming I was friends with Obama, remember?

My dream about Ted Cruz was kind of like the one about Barack Obama, though, in that my dislike was swept aside and I found myself having a good time. I was comforting Ted Cruz in his defeat. I was telling him he had a promising future, hang in there.

And together we went here, and we went there. And I spoke to him about Leonard Pennario.

As we were hanging out I felt kind of uncomfortable, though, because I was afraid he would ask me, "Mary, you did vote for me in the primary, didn't you?" And I did not!

It is funny with your dreams, you find yourself hanging out with people you never would, you know? God knows what reasons your subconscious has about matching you up with these people, but perhaps there is a reason somewhere.

I think in this case the reason is clear. I can interpret this dream.

It means: Step away from the media.

I am paying too much attention to the news!
Posted by Howard Goldman on May 06, 2016