Last night I dreamed about Barack Obama. I dreamed I was his buddy. I do not know what I ate lastnight that brought this dream on! We had red cabbage and apples and cornbread and this great wine and parsley sausage from the Hertel Farmers Market. Would that do it?

Remember when I dreamed about Hitler?

In my dream lastnight Barack Obama was not president yet. He was just campaigning. And true to real life, I was not on his side. But we were buddies! He had a house in Buffalo or a place that he stayed, and I would go over there and we would sit around, by ourselves, for hours. There was no hanky-panky going on between me and Barack Obama, I must stress that. Although there was one time in the dream when he changed his clothes, all the while joking around with me. And I was sitting there drinking coffee looking at him in his underwear and thinking how cute he was.

What about Michelle Obama? 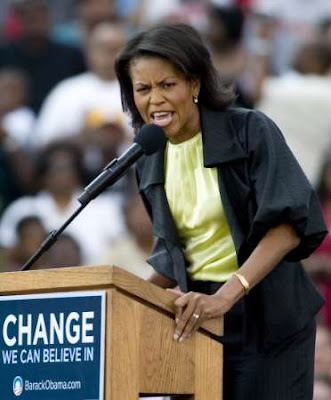 I remember rejoicing that Michelle Obama wasn't there because I was enjoying my access. This must have been a reflection of my situation with Leonard Pennario. Many times I have thought how lucky I was that he never got married. You do not want a wife getting in your way. My friend Alenka who wrote that book about the British flying ace Leonard Cheshire ... ... said that Leonard Cheshire's wife was always getting underfoot. You do not want that!

There was one time in my Obama dream when Obama was going to go on Kevin Hardwick's show. Kevin Hardwick is a Canisius College political science professor who has a show on WBEN-AM that Howard listens to called "Hardline with Kevin Hardwick."

I said: "Barack, not that I want you to win anyway, but do you think this is the way you should be prioritizing your time, going on this show? It's just Buffalo."

Obama said that didn't matter, he was looking forward to going on Dr. Hardwick's show.

I said: "Well, as I said, I don't want you to win anyway." And he laughed. We got along well, Barack and me. It would have been nice if I had used my time to change his mind about a few matters like abortion and Gitmo, you know? Those things depress the heck out of me these days. What do you bet those baddies from Guantanamo Bay wind up somewhere near Buffalo? You just know that they will.

But I did not. Instead I am just sitting around thinking: here I am with a celebrity and this celebrity is good-looking and likes me! That is how Americans think. We love celebrity and we get so caught up.

This morning, when I got up, I even missed my buddy Barack!

Get me some of that sausage MKG was talking about.

Chris, I was linking to this post and only just now saw your comment... hahahahahaa! Darn, the Hertel Farmers Market is closed now...