Nerd to the rescue 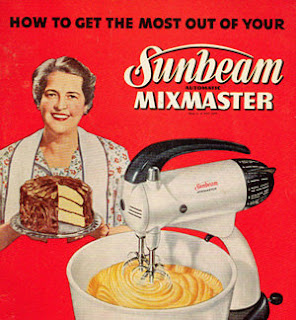 With the assistance of my new helper I was able to turn out a Betty Crocker sour cream coffee cake for our church coffee hour, and also, ahem, Lacy Oatmeal Cookies. They went, too!! We had a big crowd.

This is what happens when you bring in a Sunbeam Mixmaster. People gather!

I love that ad up above, the seasoned cook gazing admiringly at the appliance. Being a novice I had so much fun, standing over this antique whirring machine. Here is something I love about the Internet: You will always have access to some nerd who delivers arcane information you desire.

About the Model 9, the Mixmaster I own, he wrote:

This model appeared in August of 1948. Some of the new features include a plastic tip on one of the beaters to help turn the bowl. Also the decal changes during the model 9 production run. Early model 9s have the early style decal and the later ones have decals like in the picture.

I am reading that fascinated.

I had been puzzling over the plastic tip on one of the beaters! I was thinking: Oh well, it probably got worn off the other one, but that's OK. Now I see it is as God intended.

The chronicler also wrote of a previous model, Model 7: "This model is first with the beater ejector. A simple twist of the handle and out come the beaters."

I could not figure that out on my own! I had begun to think I had an earlier model because I could not find a beater ejector.

Thanks to the nerds on the Internet!