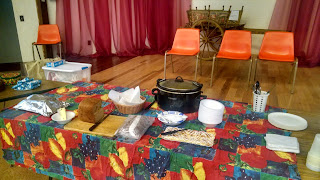 I have waited until now to share some of the most exciting news of the week. On Sunday, my friend Lizzie and I hosted the church coffee hour!

OK, so it was mostly Lizzie, with the help of a number of friends from church. Mostly what I did was, I brought a Crock Pot of split pea soup and bread from the bread machine. Lizzie brought banana bread and beef stew and I do not even know what else.

Above is a picture we took before Mass. That is a Sicilian donkey cart in the background! This is St. Anthony's, where Pennario was baptized, the mother church of Buffalo's Italians.

We had to get there early to set all this up. And during Mass I am looking down from the choir loft wondering: Did Lizzie even get to Mass? Or is she still next door working on the coffee hour? All of a sudden while we were singing the Credo I realized she was there because there she was walking out. She had been sitting near the front and the incense got to her.

We do love our incense at St. Anthony's! We have clouds of it.

Anyway, I continued to be nervous about the coffee hour. Mass is going on and I am sitting there thinking: What about the crock pot, is it on Low? Should I have put it on High? Will the soup be hot enough? What if nobody eats it? It was an old hippie vegetarian recipe from the Moosewood Cookbook. What if people don't like it? What about the bread? Will people eat it? What if it crumbles when we try to slice it?

I was like St. Martha. St. Mary is the one who sits at the foot of Christ and listens to Him and meanwhile St. Martha fusses. That was me!

But it all ended up working out OK, and it was fun. The split pea soup all went. I was able to bring a bright tablecloth. The coffee hour was held until recently in this little room but now it has been moved to the social hall which is this huge cavernous space. It needed to be warmed up somehow.

What makes this kind of thing fun? I wonder that. But it was fun, all of us fussing over the coffee urn and the sugar and the various desserts. Lizzie, having recovered from the incense, had accomplished a lot including moving the crock pot to the front of the table and adding salt and pepper shakers. Desserts included but were not limited to: blueberry bread, cranberry bread, Timbits, mint chocolate chip cookies, and Entenmann coffee cake ... a must at every coffee hour. 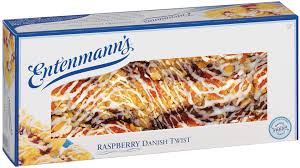 Entenmann's is now owned by Bimbo Bakeries, a brand name I love.

We also had biscotti, made by Dorothy. 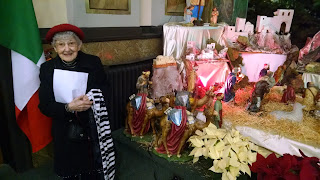 Although she was not here to witness her culinary triumph. Once a month she goes to mass at the Dominicans and alas this was the day. But she had given me the biscotti in advance,.

I am already looking forward to next time. I will make another soup or stew, I do not know what yet. But I can make stuff in a Crock Pot in my sleep and have indeed done so.

The world runs on coffee, you know?

Without it, nothing would get done!