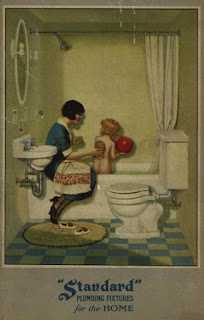 It is a long story but today I learned to appreciate my bathtub.

Some time ago I learned to appreciate my toilet. I mean the toilet in the downstairs half-bath. Howard taught me to see its greatness.

Likewise today I see my bathtub with new eyes.

I have been at odds with this bathtub for some time. I have been wanting to replace it because I have trouble cleaning it, whatever. And it seemed old and doddering. I was seduced by ads for soaking tubs. I have spent time on Pinterest.

However, today, I found myself looking at my bathtub.

That was because Howard pulled off a kind of miracle, fixing not only the bathroom sink, which was plugged up, but also the shower. He made the shower excellent. It blasted down on me like Niagara Falls and I found myself thinking: I no longer want to replace this tub. What if the people who replaced the tub screwed up the shower?

After drying off and bundling myself in Leonard Pennario's bathrobe, I went and looked at the tub. It was kind of deep, now that I thought about it. I got a yardstick and measured the depth. It is 18 inches! That is deeper than most tubs.

Epiphany: I do have, ahem, a soaking tub. And in the corner I saw the brand name was Standard. Not American Standard. Just "Standard." With the "S" a stylized shape.

Howard pointed out that meant that it was before Standard merged with American Radiator, which it did in 1929. God knows how he knew that but he did. That means my bathtub is a genuine 1920s bathtub! Or earlier. It is not a claw-foot but modern bathtubs in that era were not. Witness the ad above.

My tub may well have been original to the house!

It could even have been used to make bathtub gin!

Isn't it funny, you can be sitting on something forever and not realize what it is. I have been in this house how many years? I never thought about this.

I took Howard out to dinner in thanks for fixing the plumbing. We went for sushi. 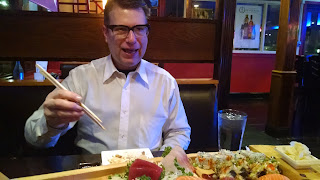 Today I cleaned the tub and the floor.  I am going to start to treat this tub with respect. It is an antique! Good thing I realized it before I replaced it.

Learn from me. Before you toss something in your house or apartment, Google it. Analyze it. You might be sitting on an antique.

Rejoice in what you have!