My life under the Tuscan sun 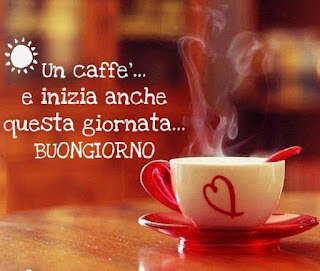 I was on my way out and because I had been loitering and talking, people were arriving for the Italian Mass. The Italian mass takes place after the Latin mass. This is at St. Anthony's church in downtown Buffalo. Anyway, this couple were walking down the sidewalk toward the church, and I was passing them because I was on my way to, you guessed it, the social hall -- to do more loitering, this time over coffee.

As the couple drew near I heard them talking in Italian.

And I smiled, and I called out: "Buon giorno!"

That was the greatest! Because last week I had passed some folks heading toward the Italian mass and speaking Italian, and I had said, "Good morning." And later I was kicking myself. How many opportunities do you get to say "Buon giorno!"? Without shelling out to go to Italy, I mean? Why hadn't I said "Buon giorno!"? Shame! Misery!

Ergo, today I was ready.

"Buon giorno!" I sang out. And the couple lit up. I mean, I know I probably have a terrible accent, one that would make Leonard Pennario, let alone St. Anthony of Padua, cringe. But the man and woman seemed to think it was fun. They said it back to me.

Then the woman asked me, in Italian, how I was doing. I can't remember what it was but I understood it. In foreign languages I always understand better than I speak. In English it is the other way around.

Somehow I came up with the word "Bene." And they nodded and smiled in approval. We were all laughing and enjoying.

Without shelling out to go to Italy!

I will have to work up a new phrase for next week. Anyway -- till tomorrow --