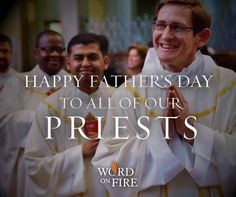 My father died a million years ago but that does not mean I do not celebrate Father's Day. Au contraire!

We had a new Father today saying our Mass at St. Anthony's. He is from Tanzania and we are very happy to have him. There were many whispers about can we make this permanent and will we have to share him with anyone else. The priest's name is Father Justus, followed by a long African last name that I cannot pronounce let alone spell. So we call him Father Justus.

Father Justus said the Low Mass, not the High Mass as we are used to but it was beautiful in a different way. The Low Mass is kind of cool because there are long periods of time where nobody says anything audibly and if anyone poked his head into the church to check it out, he would think we were all crazy. I enjoy that intense atmosphere. It is most mysterious!

At coffee hour after Mass, everyone was fussing over Father Justus and bringing him the most choice items from the buffet which, we pride ourselves at St. Anthony's on our irresistible food. It was determined that Father Justus liked tea better than coffee and there was a whispered conference among parishioners about how could we not have tea, how could we be so stupid, we have to remember to have tea hereafter.

Meanwhile he was brought chili and a cupcake swirled high with chocolate frosting. Father Justus sat down and blessed himself and said a little prayer and then ate the cupcake slowly, seriously and very neatly. In coming weeks I will have to fill him in on the way our dear departed friend Andy Jones taught us to eat cupcakes. You saw the cupcake in half and then eat it like a sandwich with the frosting in the middle. A very few people are in on that secret but soon Father Justus will be.

It is funny, at the coffee hour I realized I was deciphering not only Father Justus' African accent but also my friend Steve's Croatian accent and, of course, Dorothy's Italian Alpine accent. Father Justus and I did share one sort of emotional moment about that. I said, Father, it is the way it is in the Gospel, people from all tribes and all parts of the world, all speaking the same language, Latin. And he agreed and we had a kind of meeting of the minds.

When he got up from the table Father Justus made the Sign of the Cross again.It was hard for him to leave because nobody wanted to let him go. Next time I will take a picture. I did not want to freak him out by taking his picture today because everyone was jumping all over him.

After that I went to Dorothy's house because she had bought a wheel of Gorgonzola cheese and offered to give me some which was so nice of her. I love going to a church where people buy whole wheels of cheese. But that is another story for another day.

Then I went home and listened to the Monks of Norcia and ate Gorgonzola cheese and drank Bengal Spice tea and did Leonard Pennario editing while the cat napped nearby.

What a perfect day.