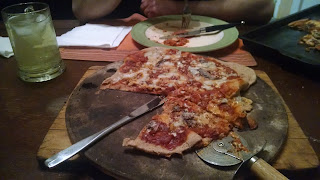 Last night, finally, an achievement! I made pizza for what I believe is the first time on a pizza stone. On a heated pizza stone!

God forbid any caloric art eludes me, you know? One of these days I will update you on my other new hobby, ice cream. For now, about this pizza, I made it late last night. Actually I made two. The other one is visible in the upper left, a corner of it anyway.

That other pizza baked on a cookie sheet. But as I lifted the dough up off of the counter I realized, it all stayed pretty much in one piece and it was not sticking. Maybe .. maybe ... just maybe I could roll out the next one and slap it onto that stone.

I almost said forget it. The pizza stone lives on the bottom shelf of the oven and it was searing hot, the way it was supposed to be. To take a pot holder and heft this heavy hot thing out of the oven and slap dough on it -- aiiieeee. I had never seriously considered it. The only reason I even had the pizza stone was that I picked it up at a garage sale at some point. Pizza stones are a hot garage sale item because they are big and heavy and no one actually uses them.

Oh well. Pennario was never afraid of a challenge ...

Out came the stone. Slap went the pizza. The circle became a little misshapen, and once it is on that stone, that is it, do not try straightening it out. What the heck, it added to the Martha Stewart charm. Back it went into the oven. Slam went the oven door. I did it! I did it!

And it came out great, crisp in a way the cookie sheet pizza, while yummy, was not. This was a thin-crust pizza. One important thing, it incorporated the Gorgonzola cheese from Dorothy.

I am going to call her today and tell her thank you!

Mary! Now what you need is a thing called a "peel" to put your dough on that u then slide into oven and propel onto the pizza stone. Then you don't need to move the red hot stone to your counter etc. Good luck finding that at a garage sale!