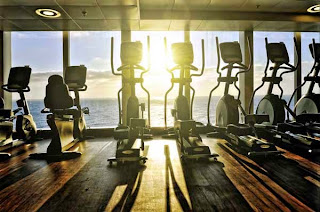 Every once in a while I have a gym epiphany, a turn of fate that makes going to the gym easier.

Here is a new one.

Other people no doubt knew this but I had not given it a try. You can watch movies on YouTube while on the treadmill! Or the elliptical machine, as was the case for me.

All kinds of old movies are on YouTube. And old movies are better than new movies in most cases. I just saw that a movie I love, "I Know Where I'm Going," is on YouTube, complete. Pennario loved that movie too. We discussed it. I think of Pennario in relation to a lot of movies, I have to say, because he loved movies so much.

"I Know Where I'm Going" is a bit too good for the gym so for my first gym movie, I am watching "The Wicked Lady," an outrageous 1940s black-and-white yarn starring Margaret Lockwood and James Mason.

I guess you could call it a melodrama. YouTube suggested it to me based on I don't know what, but you know YouTube, it knows you better than you know yourself. At first I doubted that, and I was ready to give the movie the hook. But it would have been too difficult on the elliptical to find something else, and I thought, this might get better.

And it did! You had to catch on to it. It is an 18th century drama and the first thing that happens is, this lady  Caroline is ready to marry this gentleman named Ralph, but her friend Barbara sweeps in and steals him. That was where I thought, oh, come on. But then everything just got weirder until you could not take your eyes away. Highwaymen got involved. There is Lord Jackson prowling the woods.

You get some pirate-speak. "Arr, this is not a matter to be decided with clear heads and dry throats."

The relationship between the ladies and the highwayman is worthy of comment. This one lady says of Jackson: "It would be an honor to be held up by someone as bold and handsome as he." They all seem to know that if you kiss the highwayman he will probably be merciful to you. And sure enough! You see him robbing these ladies and one says, "I will give you a kiss."

He kisses her and says: "Arr, I'll take no more from you."

It sounds hilarious to write about. Actually it is a good drama. Anyway there went 400 calories, before I knew it. I am waiting to see how this all shakes out. If anybody knows, do not spoil it for me. I have not even looked at the comments on the video.

I am counting on this to get me through one more workout!
Posted by Mary Kunz Goldman on May 19, 2015