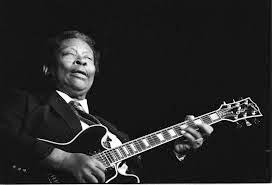 I was sad to see that B.B. King has died.  I found out on Facebook. This is why you never check Facebook after, say, 7 p.m. There is tons of bad news on Facebook! Delivered in a very impersonal way. And you do not want to get it in the evening.

You have to admit, though, old B. had a good run considering.

Considering that the night life, it ain't no good life, but it was his life.

Blues has been on my mind recently. I do not mean I have the blues. I do not! This is a happy time in my life. And one thing that feeds into that happiness is that The Buffalo News' cafeteria has turned into a restaurant called Roux, where the music is Bloux. I mean they play jazz and blues.

Not only that but the coolest old jazz and blues. Stuff I have in my personal collection and know inside out but that I have not gotten around to listening to for years. I am not making this up: The other day I was up there with a colleague and she was trying to talk to me about something and I could not concentrate because the sound system was playing Muddy Waters' "Louisiana Blues."

And after that it went into "Sugar Sweet."

I was dying. That beat. That harmonica bubbling along. That was Little Walter. Please, no one in heaven tell Leonard Pennario I love blues harmonica. He hated harmonica. I was up at 5:30 this morning and put in two hours on his book so he would probably forgive me. But you never know.

Anyway. I could not listen to a word anyone was saying. I have no idea what is going on in the office these days, ain't that the blues? Because every time I am privy to anything in the cafeteria all I can hear is this Muddy Waters they keep playing. They played his "Honey Bee" too. And "Hoochie Coochie Man." The old version, the one I love. I have no use for these British rockers, I am sorry, at least not in this context. Roux also plays  a lot of Thelonious Monk, a pianist I love. They have played "I Mean You" and "Well You Needn't."

So I sit there in this cloud.

These old-school blues, there is nothing like it. These old guys have no successors. They are the end of a line. I don't care about their sons or whatever.

Not the same thing!

Email ThisBlogThis!Share to TwitterShare to FacebookShare to Pinterest
Labels: Blues