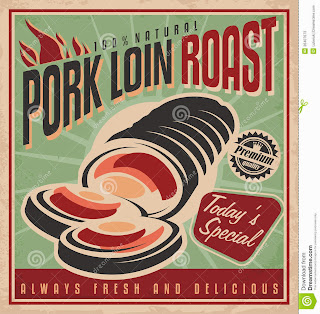 This week was another theme food week. Like hippie week. Only it was pork chop week.

It started when I found a pork loin at Albrecht Discount that looked good for $2.19 a pound. I was going to go somewhere else to buy chicken but then I thought, why not go for this pork, and save myself that errand. And so.

I planned on roasting the pork but instead I chopped it into chops and ate it bit by bit. It is not a bad idea, you know? Four pounds of pork, no waste, and we had it all week for lunches and dinners. You do not get tired of it either. It is like chicken in that it will be what you want it to be.

I did Bourbon-Glazed Pork Chops with Hoppin' John. Yes, I made the hoppin' john! The important thing is to have a plan.

And Pork Chops Oreganata. These are Greek flavored pork chops I have made before. I did a Greek potato and bean salad to go with this one.

And ... what was the other thing? Ah. These fennel-crusted pork chops out of Bon Appetit. For a while we had a mysterious subscription at Big Blue to Bon Appetit. Finally it ran out but it was fun while it lasted. I had used up my potatoes so I made a rice salad with mint and lemon balm and bishop's weed.

The fennel crusted pork chops have smoked paprika and they come out looking fantastic.

We are living high on the hog! By the way I read up once on where that comes from. The chops come from the upper part of the pig while the pork belly, which is cheaper, comes from the nether regions.

Ahem. Anyway, a good week book-wise because of getting up early and having this roast.

The living is easy!