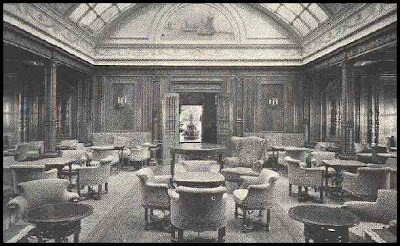 One thing that's fun about getting up early is that I am usually the first on the computer and I get to see what Howard was looking at the night before.

This morning I see that he was on Google searching for "smoking room mansion."

Does this mean we are going to have a smoking room at Big Blue? I don't smoke but I do not mind the idea. Howard was doing his search on Google Images and you should see the images he found. Unbelievable antebellum mansions against blue skies, surrounded by acres of lush lawns. The text fragments beneath the photos are even better. ".. the smoking room is straight ahead..." "Relax in the library or smoking room." "The first-class smoking room was..." And this is the best: ".. the statue in the smoking room..."

I have not mentioned Big Blue in a while so if you're new here, Big Blue is the big ol' white elephant from the 1860s, surrounded by acres of parking lots, that Howard bought downtown off Niagara Square. Did I say white elephant? I meant to say blue elephant. It was painted blue originally and now he has stripped the bricks so it is red again. Brick by brick. That is the way the Apostles were told to operate and that is how Howard, being of the same lineage, operates too. By our latest calculations Big Blue will be done by the year 2050.

Yesterday a woman named Melissa Foster whom I have not met yet but who reads the blog called and told me that she and her husband had bought a Big Blue in Kenmore. That surprised and delighted me. It made me wonder if the phrase "Big Blue" is going to become a synonym for an old building someone ill-advisedly bought. I would love that!

Melissa's Big Blue is a sprawling old house that they had been worried about because it seemed to be forlorn and without a future. That is a sign you own a bona fide Big Blue: Did you buy it because you were worried about it? Worry is frequently the major inspiration in the purchase of a Big Blue.

Another sign is if number one, people ask what you are going to do with it, and number two, you have no idea.

I am interested in the life of any fellow Leonard Pennario fan, which Melissa must be if she reads this blog. So I got the location of Melissa's Big Blue so I can do a drive-by and check it out. When I do, I will post a photo.

Meanwhile, I rejoice that she called it a Big Blue! One day, who knows, This Old House magazine will be renamed This Old Big Blue. Home Depot will have specials for the Big Blue in You. And everyone will have forgotten that Big Blue ever referred to ... what was that company again?

On that day we will celebrate down by Niagara Square, in the original Big Blue.

We will convene by the statue in the smoking room.

Does one need to have a smoking jacket in order to enter the smoking room? If so, I am tragically ill-equipped.