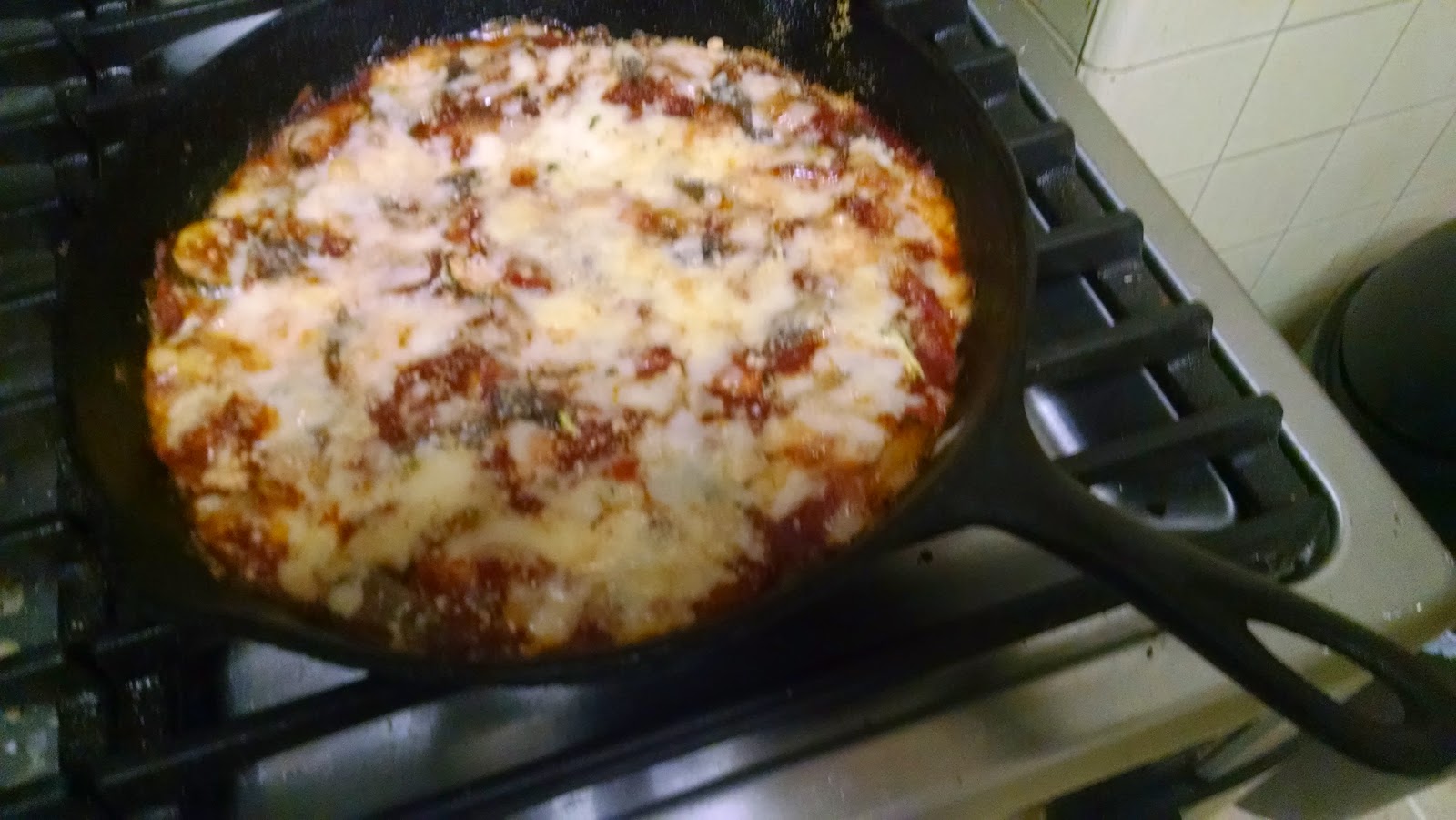 We continue the hippie food jag with the Moosewood Cookbook's Zucchini Crusted Pizza. I baked it in an iron skillet as in the picture up above. Actually that is my picture. I hate to admit it because I am not a good food photographer but I could not find a good picture online, zut alors.

Cookbook author Mollie Katzen has the recipe on her Web site.

My recipe is a little different from that one. I was cooking out of my vintage edition which is missing some of its pages and is tattered the rest of the way. I have scrawled notes all over it. On the Zucchini Crusted Pizza page it says I made that pizza on Oct. 12, 2005. I wrote that it was South Beach Diet-friendly and that I made it for my friends Toni and Jane while we watched "Night Song."

I remembered that night! We were at Toni's house. But I did not remember "Night Song."

For "Night Song" I added caramelized onions, sliced tomatoes, mushrooms and peppers and mozzarella. Mollie Katzen did not specify the amount of salt and I wrote down 3/4 teaspoon. Yes, I am a chronicler! I used to laugh about that when I was in California with Pennario. I do like to write things down. It is because I am German.

My sweet old Moosewood Cookbook, I had it in my college apartment on Parkside, the one with the ghost. The apartment I revisited that time.

My roommates and I cooked out of it constantly. We ate mostly vegetarian because we were kind of countercultural and also vegetarian cookbooks called for stuff we could buy at the convenience store. Lots of eggs and cheese. We didn't have cars and so we liked that. We used to make the quiche out of the Moosewood Cookbook. That is funny because now quiche seems like so much work, and who makes it? But then we made it a lot. Crust from scratch, everything. At least once a week, dinner was that quiche. Looking at the recipe now sort of touches my heart. The page is all blotted and torn.

The Zucchini Pizza does not really taste like a pizza, at least the crust does not. But it is yummy all the same. We put anchovies on it. And mozzarella from Albrecht Discount.

Too much fun to be having in Lent.

We are almost through it!