You CAN go home again 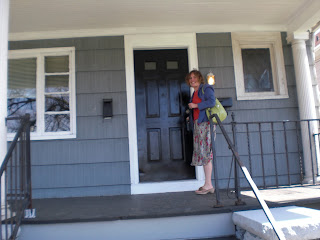 Sunday I went back to my old apartment on Parkside. Remember, I have written about this place, about how we thought it was haunted, that it had a ghost. I lived there in squalor during my lean UB years. (As opposed to my fat present years.)

That is me in the picture opening the door! I felt so funny. I wanted to preserve the moment. I opened the door and you would not believe it. The place was untouched.

Well, there was my bedroom which I had painted a beautiful shade of ice cream pink back when I lived there. Now it was boring white. But the built-in shelves were still there. I had the smallest bedroom. It was only nine feet by nine feet! But it had those shelves to compensate. I loved that bedroom. I wish I had it now.

Here is my old bedroom. 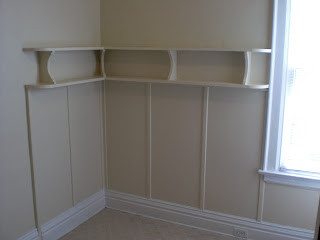 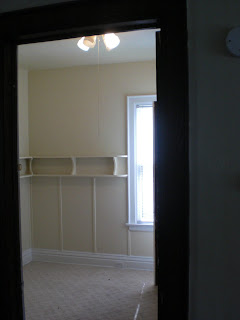 That room was where I was sleeping when the mouse ran over my face.

Once when I was living in that apartment we had a party and at 4 a.m. or so I got tired. And I fought my way through the crowd to my bedroom. It took me about a half an hour to get there and when I finally got there I found all these people crashed out in my room. I cleared a space for myself on my bed between a couple of people and I fell asleep.

That was the kind of ignorant agenda I was pursuing instead of going to hear Leonard Pennario play.

I had no recollection of my closet but this was apparently it. There was this sharply sloping wall because it was under the front staircase and there was a cool row of hooks. How could I have forgotten this closet? But I did. 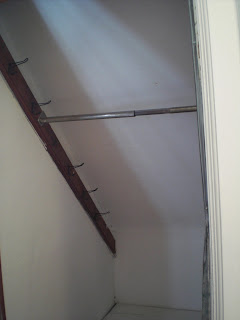 We had these unbelievable kitchen cabinets and they are still there, just as they were. 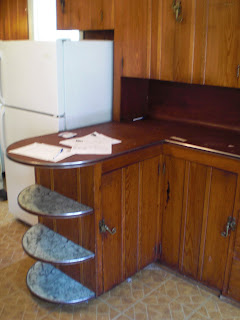 And there was a built-in telephone table in the kitchen, opposite those round shelves above. I remember walking in there with our dial phone and saying, Look, there is a wall jack, here is where we are supposed to put our phone.

Here is Lizzie standing by the telephone table. 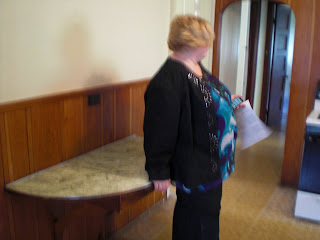 Now this is funny. As I am roaming the house I am telling everyone I used to live there. And one guy came up and said hi because he had seen my name on the sign-in sheet. Yes, I was not shy. I signed in! And he was Martin Wachadlo who is an architectural historian. I have Martin's book on the mansions of Oakland Place.

Martin went specially to this house to look at it because he was so curious about it when he heard it was open. And he was amazed by it! He said that it is so rare for a house to be preserved like this.

He said the windows were the original windows which is impressive considering the house was built in 1905. As I listened agog, he said the wood was from trees growing when the Puritans landed. Also it had other features like our 1920s-era sink, which was still there in the kitchen and which, zut alors, I should have taken pictures of.

This is the view from the upstairs kitchen which, I could not remember being in there before. 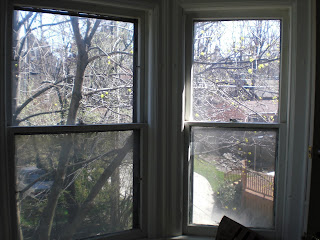 And a porch I loved off the second floor. 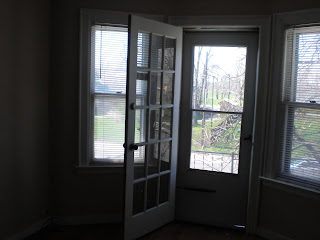 Martin said his big fear was that someone would buy the house and update it. Oh, no. Oh, no!

I had not expected to feel so affectionate about my old house on Parkside, but now I do.

Email ThisBlogThis!Share to TwitterShare to FacebookShare to Pinterest
Labels: Parkside

If there's room for the piano, why don't you just buy it--or have you become attached to the group home next door? The upstairs could be your writing studio, with its own kitchen for making tea or a sandwich while you write. Otherwise it may be gone forever, like my little place in East Aurora.

The house I grew up in from infancy to my early 20s has been erased by demolition. Might not have been bad if I had been erased with it!