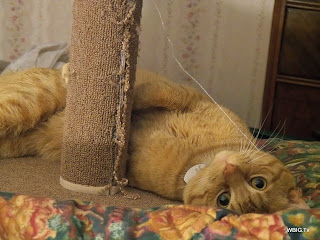 We have named our cat My Cat Jeoffry because of this British poem. That is Jeoffry pictured above in a portrait by Howard.

My father read me this poem when I was little. And recently when I was at church my friend Alenka, who is from London and is the authoress ... 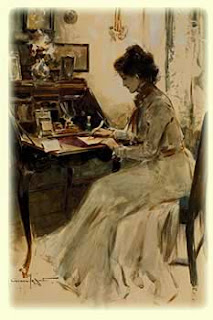 ... of the witty Web log Turkeys on the Sunlounger, mentioned it. That was when I remembered the poem.

"I will consider my cat Jeoffry." That is how it starts.

Then this poet, his name is Christopher Smart, he continues in the style of a liturgy. Every line begins with "For." Off the top of my head I can quote a few.

"For he is of the Tribe of Tiger."
"For when he takes his prey he plays with it to give it a chance."
"For one mouse in seven escapes by his dallying."

Something like that. And a line I love runs something like: "For God spoke to Moses concerning the cats on the occasion of the Exodus from Egypt."

I actually looked in the Bible to see if I could find God saying something concerning the cats! I could not. But I love the idea. And surely He did.

When we first got our cat he would get nutzed and start trying to scratch my ankles or something and I would scoop him up and say to him:

"For he is of the Tribe of Tiger!"

And another line from the poem:

"For every house is incomplete without him!"

And it would calm him immediately because he would just be so startled. Who is this nut who adopted me? First she sits around for hours every night working on this book on this concert pianist Leonard Pennario and now what in the world is she talking about?

The poem was written in the 18th century so it is quaint. It is also religious. But it is such a tender portrait of a cat. And cats have not changed one bit over hundreds and hundreds of years. He even talks about the cat playing with a cork. Our cat plays with corks. Luckily a wine drinker lives in this house and so those are those timeless cat toys lying around.

I sort of wanted to call the cat Jeoffry but Howard had naming rights because it is his birthday cat. Last week we were talking about it was time to give the cat a name. I mentioned Jeoffry.

Howard said: "I call it Cat. Or My Cat. It seems to recognize that."

I said, "Howard, that's the name of the poem, My Cat Jeoffry!"

And immediately it was clear that is his name. He can be Jeoffry or My Cat Jeoffry or Cat or My Cat.

For I will consider my Cat Jeoffry.
For he is the servant of the Living God, duly and daily serving him.
For at the first glance of the glory of God in the East he worships in his way.
For is this done by wreathing his body seven times round with elegant quickness.
For then he leaps up to catch the musk, which is the blessing of God upon his prayer.
For he rolls upon prank to work it in.
For having done duty and received blessing he begins to consider himself.
For this he performs in ten degrees.
For first he looks upon his forepaws to see if they are clean.
For secondly he kicks up behind to clear away there.
For thirdly he works it upon stretch with the forepaws extended.
For fourthly he sharpens his paws by wood.
For fifthly he washes himself.
For sixthly he rolls upon wash.
For seventhly he fleas himself, that he may not be interrupted upon the beat.
For eighthly he rubs himself against a post.
For ninthly he looks up for his instructions.
For tenthly he goes in quest of food.
For having considered God and himself he will consider his neighbor.
For if he meets another cat he will kiss her in kindness.
For when he takes his prey he plays with it to give it a chance.
For one mouse in seven escapes by his dallying.
For when his day’s work is done his business more properly begins.
For he keeps the Lord’s watch in the night against the adversary.
For he counteracts the powers of darkness by his electrical skin and glaring eyes.
For he counteracts the Devil, who is death, by brisking about the life.
For in his morning orisons he loves the sun and the sun loves him.
For he is of the tribe of Tiger.
For the Cherub Cat is a term of the Angel Tiger.
For he has the subtlety and hissing of a serpent, which in goodness he suppresses.
For he will not do destruction if he is well-fed, neither will he spit without provocation.
For he purrs in thankfulness when God tells him he’s a good Cat.
For he is an instrument for the children to learn benevolence upon.
For every house is incomplete without him, and a blessing is lacking in the spirit.
For the Lord commanded Moses concerning the cats at the departure of the Children of Israel
from Egypt.
For every family had one cat at least in the bag.
For the English Cats are the best in Europe.
For he is the cleanest in the use of his forepaws of any quadruped.
For the dexterity of his defense is an instance of the love of God to him exceedingly.
For he is the quickest to his mark of any creature.
For he is tenacious of his point.
For he is a mixture of gravity and waggery.
For he knows that God is his Saviour.
For there is nothing sweeter than his peace when at rest.
For there is nothing brisker than his life when in motion.
For he is of the Lord’s poor, and so indeed is he called by benevolence perpetually--Poor Jeoffry!
poor Jeoffry! the rat has bit thy throat.
For I bless the name of the Lord Jesus that Jeoffry is better.
For the divine spirit comes about his body to sustain it in complete cat.
For his tongue is exceeding pure so that it has in purity what it wants in music.
For he is docile and can learn certain things.
For he can sit up with gravity, which is patience upon approbation.
For he can fetch and carry, which is patience in employment.
For he can jump over a stick, which is patience upon proof positive.
For he can spraggle upon waggle at the word of command.
For he can jump from an eminence into his master’s bosom.
For he can catch the cork and toss it again.
For he is hated by the hypocrite and miser.
For the former is afraid of detection.
For the latter refuses the charge.
For he camels his back to bear the first notion of business.
For he is good to think on, if a man would express himself neatly.
For he made a great figure in Egypt for his signal services.
For he killed the Icneumon rat, very pernicious by land.
For his ears are so acute that they sting again.
For from this proceeds the passing quickness of his attention.
For by stroking of him I have found out electricity.
For I perceived God’s light about him both wax and fire.
For the electrical fire is the spiritual substance which God sends from heaven to sustain the
bodies both of man and beast.
For God has blessed him in the variety of his movements.
For, though he cannot fly, he is an excellent clamberer.
For his motions upon the face of the earth are more than any other quadruped.
For he can tread to all the measures upon the music.
For he can swim for life.
For he can creep.

I think those of us lucky enough to have cats may feel free to add to it.
Posted by Mary Kunz Goldman on November 14, 2014

The poem was the text for Benjamin Britten's sacred cantata "Rejoice in the Lamb." I recommend it to you, Mary.

As a poet myself I love this post on Jeoffry......Here is on about my cat who is named Tiger properly but has adopted the name Mitten Kitten from GT... For he waketh me in the first light of dawn with his claws...and I rebuke him from my bed....For..only to see him again purring on my head...and my restful slumber is no more For the day has surely begun...- Anne Apfel...

Ward, Howard sent me a link to the Benjamin Britten! I have to set aside time really to listen to it. Thank you for the recommendation! There is a lot by Benjamin Britten that I love.

Anne, I LOVE your additions to the poem. "For he waketh me in the first light of dawn..." Jeoffry always awakens us when it gets light! The funniest thing is you can hear him heading up the stairs, his meowing growing louder and louder...

Anne, you would have to co-host Cat Chat! That is a great idea for a show.