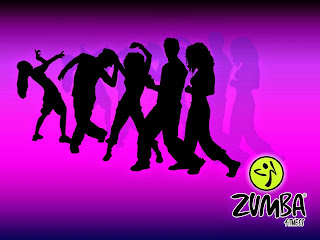 Yesterday I had a very long day at work so I chilled out afterward by going to Zumba. Our cat Jeoffry had been under the weather so I found myself apologizing to him as I backed out the door in my pink Zumba pants.

I actually said that!

The good news is that Jeoffry got over what he had which, that is a story for another day. Also I liked Zumba class a lot more than I thought I would. I had kind of fallen off the Zumba wagon because it had become too much a hip-hop, shake-your-booty, backwards-baseball-cap thing. I mean, I can take a song or two of that, but I do not want it to be the whole class.

It seemed it had become all this monotonous stuff with someone yelling something over a beat. Once I kept track and there were something like 10 songs in a row with absolutely no tune. Some of the words were too trashy. The "songs" were too dumb. I picked up that snotty habit from Leonard Pennario of the sarcastic use of quote marks.

Also, as you can see in this picture ... 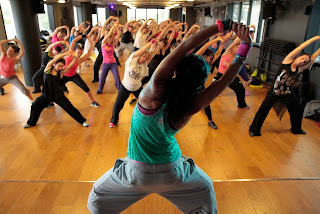 ... nobody wears those cute neon-colored Zumba clothes I used to like. It says you do not take yourself too seriously and now I think Zumba takes itself more seriously.

Anyway I had not been to Zumba in a while.

But you have to do something, you know? I missed the exercise. So yesterday there I was. And it was better. Not as bad as I had been remembering. Perhaps the pendulum is swinging, pendulously, back the other way.

Plus we had a great teacher who never stopped the class. I hate lazy teachers who stop the class. It ended up this teacher was imported from Clarence for the evening, my luck. But anyway, good class, and it made me feel good. I will try Zumba again.