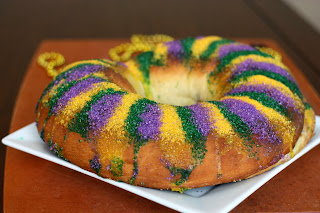 I have one more caroling event in my future! We are going to warble Three Kings type carols after Mass on Sunday morning at St. Anthony's. It was the idea, the epiphany should I say, of caroler Patrick, pictured with his family the other day in all their Victorian splendor. We decided we could turn our after-church coffee hour into a Three Kings party. Then we could invite the carolers and anyone else who would like to sing.

Which begs the question: How can I make this caroling effort as caloric as humanly possible?

I went looking through December issues of Martha Stewart and other cooking magazines looking for recipes pertaining to Epiphany, or the Three Kings, or the Magi, or Twelfth Night --  I kept using different search words, because I was having trouble finding anything. I mean, Martha Stewart especially, you would think that one or another Christmas issue would have featured Three Kings good things, wouldn't you? It is such a famous and beautiful image, the image of the Three Kings.

I love the idea of making star cookies, in honor of the Star of Bethlehem.

Or you could make Gingerbread Wise Men. That is another idea!

But looking around the Internet I got the idea of trying to make a New Orleans King Cake, pictured above (although mine will probably not look anywhere near as professional).

The King Cake has become traditional for Mardi Gras but it is actually an Epiphany tradition. Epiphany marking the arrival in Bethlehem of the Three Kings. The cake is decorated with purple, gold and green because those colors signify the three Kings, so I read. Wow, Mardi Gras colors ... 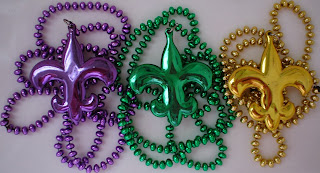 ... finally explained! They come from the Three Kings.

I took the picture from this Web log where they tell how to make a King Cake. However they admit that their picture showed one from a bakery. I knew it. I knew it!!

It is an interesting post beyond the recipe. They have a letter Abigail Adams wrote from France about the curious Roman Catholic religion ...

You must know that the religion of this country requires [an] abundance of feasting and fasting, and each person has his particular saint, as well as each calling and occupation.  Tomorrow is to be celebrated le jour des rois [The Day of Kings]. ...

It goes from there.

Whatever I end up making, I do love that while other people are taking down their Christmas trees and getting back to business, I am starting a whole new wave of baking and feasting. Christmastide is turning me into a different person. It is like when I was in California and Leonard Pennario got me all used to ice cream.

Also looking into Three Kings treats helps me get the message that the season continues for a little bit. Before, I was talking a good game about it, but it was not as if I really felt it.

Put the bag of sugar and the pound of butter in my hands, and I feel it.

It is an epiphany!