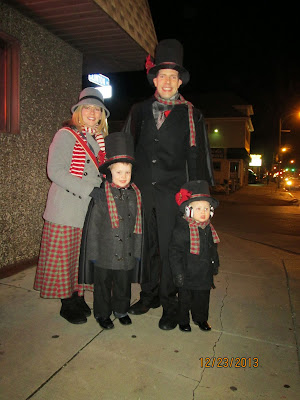 Behold four of our photogenic carolers singing in Kaisertown!

We had a good group heedless of the wind and weather, which is a phrase I seem to be using a lot lately. Kaisertown was not our easiest audience but the adventure is part of the fun.

Our Kaisertown set list included but was not limited to: "Hark, the Herald Angels Sing," "Silent Night," "Adeste Fideles" (which we sang in Latin in a Pakistani deli), "God Rest Ye Merry, Gentlemen," "Joy To the World," "Deck the Halls," "The First Nowell," "We Wish You a Merry Christmas" and "Ding Dong Merrily on High." We did not attempt "In Dulci Jubilo" on this particular trip although in Black Rock we sang it on a street corner with great gusto. Kaisertown also did not get to experience our "Here We Come A-Wassailing." We did not get to that and the locals are the lesser for it.

My friend Lynn attempted later sensibly to point out that really all we need is four songs. She announced, "Next year we have decided we need to learn only four songs, because --"

That would be sensible! And Christmas is not about common sense.

Behold, I bring tidings of great joy, that next year our repertoire will at least double. I am of the mindset of Leonard Pennario who played something like 25 different concertos in a season and chafed if he was made to play the same thing more than twice in a row. I need variety.

Next weekend on our forays in Allentown and Williamsville I will be more organized as far as the sheet music and we may well attempt to sing all 12 of our carols.

One for each of the 12 days of Christmas!