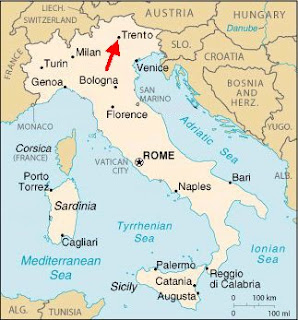 There is this woman named Dorothy whom I pick up a lot of the time and take to church. This woman who used to take her to church died and because I do not live far from Dorothy, I have inherited her.

Dorothy is in her 90s and was born in the Italian Alps. She is a very elegant lady! I will have to take pictures and post them.

She came to America in 1937. She is from the Province of Trentino which she says makes her a Tridentina. Andiamo! Let us explore Trentino. You will want to turn off your sound because the music on this video is cruddy. But the country is beautiful!

Dorothy is amazing in many ways. She is very limber and when we sing in the choir loft she clambers up the steep stairs twice, once at the beginning and again after Communion. She has this chic little cane she folds up. She is constantly going out of town and to weddings and parties and retreats and reunions.

Dorothy was at my mom's funeral and it is funny but since then she has stepped into the shoes of my mother who was also named Dorothy. Oh, and another funny thing, her last name is almost the same too. There are just one or two letters' difference.

My mother used to get on my nerves by reminding me of Holy Days of Obligation and now Dorothy from Northern Italy does that. I was in the office Thursday night, working late, when I get this phone call. And it is Dorothy with her accent. She is wondering if I am going to pick her up for Mass. "It's the holy day," she reminds me. "The holy day of the Assumption."

And just as I did when my mother used to call me about that, I went, "Darn!"

I had completely forgotten!

If I had not been reminded, as was so often the case with my mom, I could have innocently worked through the holy day, and I would have been sinless because I would have forgotten, right?

Long story short, no Zumba class, an hour later there I am at Mass.

Then this morning in the car Dorothy is in the middle of telling me a story and then she says: "I'm not going to talk to you while you're driving." Which my mother used to say, all the time. Then of course they go on talking to you anyhow.

Just like my mom, Dorothy the Tridentina has to hear from me about Leonard Pennario, and neither Dorothy is very interested. But they hear me out anyway.

Anyway, it cracks me up, the Lord giveth Dorothys, the Lord taketh them away.

Blessed be the name of the Lord!
Posted by Mary Kunz Goldman on August 18, 2013

My condolences on the loss of your Mother. A very difficult time for you and your family I am sure.

Sally, so nice of you! Thank you so much. We are doing OK. My mom had a long and healthy life and we thank God. You can't ask for more than that, you know?

Oh no... some how I missed the entry about your Mom's passing. I am so sorry to hear that, Mary. I so enjoyed reading about your outings together -- she seemed like a really neat lady!!

All my love to you and your family!

Bing, thanks so much for your sympathy -- I do miss my mother but one thing I love is that I wrote down so many of the silly things we did. I never would have remembered these things otherwise and when I read back on them it's as if she is still here. As you've written before, we have to treasure these great people while they are still with us! Thanks so much!