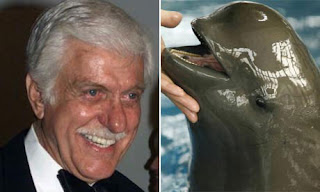 When you are trying to get something done, i.e. a book about a great pianist, the last thing you should do is peek at the Internet. Normally I do not make that mistake but this morning I did.

Was that ever a mistake.

The news was irresistible!

And of course one thing leads to another.

There is Dick van Dyke escaping unhurt when his Jaguar caught fire. The great Dick van Dyke! We love him here. He is 87 now and a couple of years ago he almost died but was rescued by a pod of porpoises.

That is Dick van Dyke up above with a porpoise. Dick van Dyke is amazing. He not only starred in "Chitty Chitty Bang Bang," he lives it!

So that was one story. Another was: John Cleese launches attack against British media. I had been wondering what John Cleese was up to and now I know.

The greatest is this story about a tribe in Peru that is threatening to cross a river.

They are demanding bananas!

It is the Mashco-Piro tribe. 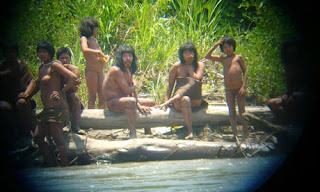 The story says: "The Mashco-Piro live by their own social code which includes kidnapping other tribes' women and children."

This beats reading about the impending demolition  of beautiful St. Ann's or the unspeakable goings-on in Egypt, you know?

I have hit "Escape"!