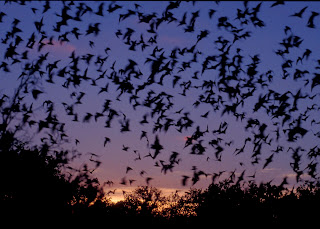 Bats love Big Blue and last night a bat flew into the house and began orbiting wildly, sometimes swooping inches from our faces. Sometimes you could feel the beat of its wings!

We have learned from experience not to be afraid of bats. And besides as my musicological research has disclosed, the presence of bats vastly increases the odds that your house may be hidin' a Haydn manuscript. And so we sat there laughing.

Howard was calling the visitor "Batty."

Good thing we were used to it, too! Because here is what happened. The bat eventually stopped orbiting and glued itself to the brick wall over the fireplace. It chose a spot high up over our heads and it was strange, how the bat blended in with the brick. You could hardly see it except you could just make out its little ears, like the ears that Batman has.

Then suddenly there was another bat!

It came zooming into the house and began orbiting the way the first one had. Meanwhile the first bat stayed fastened to the wall, hunkered down, almost invisible. This drama continued for some time and eventually it occurred to us: Perhaps the bat on the brick was hiding from the other bat.

Perhaps they were a couple that was fighting!

Maybe the brick bat was a bat-tered spouse!

We could not stay to see the end of the drama. We had to go home because I had to be up at a decent hour to work on the Pennario project. But surely the bat soap opera continues, because as far as we know the bats are still in the house.

Speaking of bat opera, next time we go I will bring a record of "Die Fledermaus" to play in the deejay booth. It means "The Bat."

And we will be ready for anything.

We will bat-ten down the hatches!