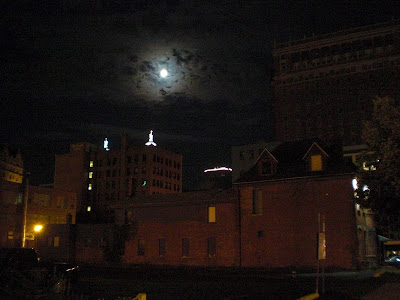 Downtown Gotham last night.
After Howard took me out to Jocko lastnight I forgave him his ignoring of my artisan bread and his consumption of the Wegmans sub. Well, I am still working on forgiving him the sub. But after another trip to Jocko that should be OK.

If he didn't butter up the bread, at least he is buttering me up. And it is working!

Jocko played us "Midnight on the Cliffs" in honor of Leonard Pennario. Afterwards, Howard took pictures of the Liberty Building, Big Blue and the full moon. (See above. Big Blue is in foreground.) Buffalo has an unusual skyline, as we discussed a while ago. Lastnight we were thinking it looked like a set for "Batman."

Speaking of which, look at Howard's comment the other day about keeping company with a bat! Howard is Bat Man!

And there is a Haydn manuscript in Big Blue.

There has to be. I am sure of it. Last week I had lunch with Chuck and Kay Martina, old friends of Leonard Pennario. Kay gave me a sheaf of old newspaper clippings to look at from The Buffalo News. One was a book review of.. I forget what, because what really caught my eye was a story on the other side.

It was an interview with the musicologist H. C. Robbins Landon. He is famous for his research on Mozart -- I read all his Mozart books when I was a kid -- but he also did a ton of research on Haydn. He had a lot to do with all the Haydn that is played these days. The interview talks about how he found excuses to knock around Austria and Germany after World War II, so he could dig up all these old manuscripts.

Landon seems to have been a great interview. He has a very gritty way of talking. When he's talking about releasing the first recording of Haydn's "The Creation," he recalls seeing: "hard-bitten New York s.o.b.'s with tears streaming down their faces." And I liked this: "I had been admitted to go to Harvard and get my Ph.D., and I thought this over, and I said I'm not going to do it. I'll get myself into the army here so I can stay in Austria and get my hot little hands on those manuscripts. Harvard was insulted beyond belief. Nobody had ever said, 'I'm not going to come.'"

Ha, ha! I like anyone who insults Harvard. Anyway, Landon goes looking for those manuscripts, and he finds them in buildings -- well, like Big Blue.

"All over Austria -- the Frankenstein-Dracula country -- there are these really spectacular, dank, frightening castles that have Haydn manuscripts," he says. "One of them is called Harburg -- that's in Bavaria, and you can see the bats swarming out of it sometimes -- and it has a huge collection of Haydn."

I am not sure that Austria would be considered Frankenstein-Dracula country. I think that is Transylvania in ... Romania, wouldn't that be?

But I am sure that there must be Haydn in Big Blue. I mean, look at the place, in the picture above. All the signs are there. The bats. The dank and frightening aspects. Well, in the basement anyway. And the third floor.

I am thinking the third floor is where the Haydn is hidin'.

I am going to go in with a flashlight.
Posted by Mary Kunz Goldman on August 15, 2008

Ah yes, H. C. Robbins Landon. As I was once an organist, it is of interest to me that E. Power Biggs recorded Haydn organ concertos in the Stadtpfarrkirche in Eisenstadt, Austria many years ago. Haydn knew and played that organ and Robbins Landon discovered an unknown Haydn manuscript in that organ loft in 1951. I don't know if the concerto recording is available anymore, but Biggs and company recorded a Christmas carol album (arrangements by Daniel Pinkham) in that church that I still have...in vinyl.