Victorian poet comes back to life 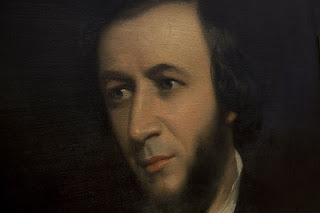 Don't you hate it when a Victorian poet from the 19th century won't stop talking at you?

When he interrupts your work?

Today my Internet went blooey so I had to jump through hoops and restore it. And afterward, while I am trying to concentrate on Leonard Pennario, not to mention Facebook, there is this man's voice talking at me.

It was the poet Robert Browning!

No matter, there he was, interrupting my work. He recited some poetry and then he suddenly stopped and he said ... I am really not making this up:

"I'm terribly sorry but I can't remember my own verses!"

Hahahahaa! I remember a little bit of Robert Browning. He wrote a poem called "My Last Duchess." Wow, look at that site. The Victorian Web. We must not be a stranger to that site. Anyway, Robert Browning was the one to whom Elizabeth Barrett Browning addressed her famous sonnet: "How do I love thee? Let me count the ways."

Now I see why Elizabeth Barrett Browning loved him!

Who wouldn't love a guy who would stop and say: "I'm terribly sorry but I can't remember my own verses?"

The reason I was hearing Robert Browning's voice was, apparently I had clicked on this video but never listened to it, and I had forgotten about it ... until now. When I re-started my computer there he was, this 19th century poet.

At the end of the recording, he is cheering Edison and he says, "Hip, hip, hooray!" What a darling man.