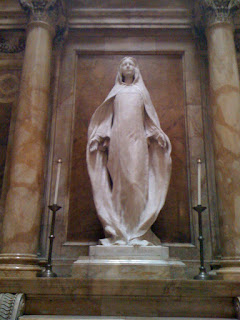 It is high time I weighed in again!

I went to New York City to see the Buffalo Philharmonic Orchestra play at Carnegie Hall and while I was there, yikes, I caught this bug. For the past two and a half days I have been sleeping! But now I am up. It is almost midnight so I still have time to write in the Web log on today's date and make my hiatus one day shorter.

One thing I did in NYC before the bug descended was, I went to Mass and Confession at the Paulist Church. That is the church where Leonard Pennario used to go when he was in New York.

It was cool to go to that church and I found out why he went to Mass there: It is just a couple of blocks from Carnegie Hall and Lincoln Center. I felt a little emotional walking in the doors.

It is a beautiful old church. There was also this very cool statue of the Blessed Virgin Mary which I photographed up above. Beautiful and simple. And here is a stunning crucifix. 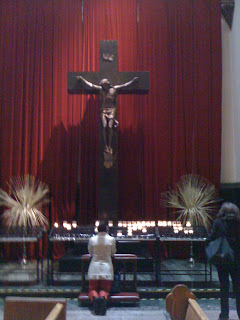 There was a guy with an instrument case at Mass. Very New York. And here is what was also very New York: There was a person texting in the confession line!

A slim, stylish Asian girl, two people ahead of me. And she looked like the people you see texting at stoplights, glancing up at regular intervals to make sure the light has not changed. She would glance up to make sure the confessional had not opened.

When it did, the phone went into her pocket and she went into the booth.

Judge not, and ye shall not be judged. We shall give the confession texter the benefit of the doubt.

Perhaps she was using the Confession App!

Mary...love and appreciate your blog!