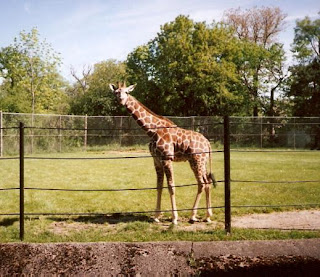 Signs of spring! The giraffes were out.

I told Howard I was going to make note of the giraffe and he said: "You'd be sticking your neck out." Ha, ha! But I am doing it anyway.

I could not take a picture from my car in the heat of the moment so I used that picture up above from Trip Advisor, of a giraffe at the Buffalo Zoo. It is cool how the Buffalo Zoo is in the city, right on a well-traveled street corner, so it is not unusual to round the corner and see a giraffe. Other animals, too! Once I saw a rhinoceros. I just happened to have just the right view into the zoo.

That is a most excellent thing, when you are driving down an ordinary city street and can see a rhinoceros! It was just standing there two-dimensional, like an animal cracker.

Anyway, that was one sign of spring, seeing the giraffe.

Another was, I saw a freighter steaming into the harbor the other day. That is a summer sight!

And one more thing, the greatest sign of all. Yesterday morning I went outside to take out the garbage -- just me taking out the garbage is a sign of spring -- and I heard the unmistakable voice that means spring. The voice from next door.

It was the guy from next door who cannot stop swearing! His voice was quiet as if he were warming up. But it was distinct! I heard him!

We may now hear Pennario playing "Rustles of Spring."