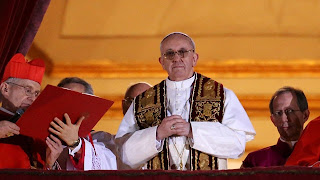 Such excitement today! I watched as the white smoke went up and as the new pope was introduced. I was at work. We gathered around the TV sets.

This is funny but when they brought him out, I hate to admit this but I felt a little embarrassed.

After all that pageantry, here he was, this humble, nondescript man.

There was all this unbelievable pageantry in St. Peter's Square. You could watch it on the telecasts. These marching bands, troops of Swiss guards, all of them moving in columns this way and that, before buildings that were unbelievably huge and imposing. All this happened at night, with lights twinkling.

You could see attention around the TV was fading. People were kind of looking at him as if to say, OK, now what?

And I was looking at him, too, kind of pained, thinking, can you smile, can you do something? 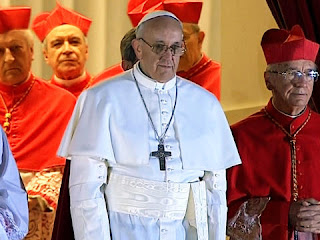 I bet ol' John Paul II was ready with a big grin! I'll bet he waved. Francis just looked in shock. for the longest time. 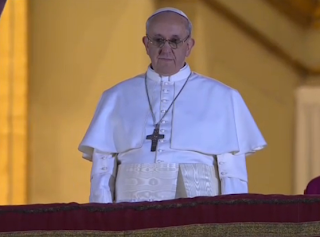 He seemed kind of reluctant and probably he was. I read that when Benedict XVI was elected, the man who is now Pope Francis was the runner-up, but he put a stop to his own election by making what I read was an emotional appeal to the cardinals, saying, please, don't elect me.

Today I have read all over the place that he had been Benedict's "challenger." Not true. It is amazing what a difference a choice of word can make and do not think writers do not know that.

Anyway, back to Francis and his demeanor as he was presented to the crowd. Later I felt silly that I had felt kind of embarrassed for him. I thought, you know what, the great saints of the past, they were probably like this. They were not about acting like a Rockstar. They were humble men and they would have behaved exactly as this pope behaved today.

Pennario loved Pope Pius XII and he gave me a picture of him with him and Pius XII just looked like some dishrag, too, standing there. And look how holy he was.

I like the Jesuits. Remember when they gave me a pass for drinking too much wine?

My mother says that is a great name, Pope Francis. And I like how journalists are all chewing over whether he meant Francis of Assisi or Francis Xavier. What about Francis de Sales? He is the patron saint of journalists and I think he should have a horse in this race too.

Oh well. It is time now to go out partying.

It is not every day that we elect a pope!