Back into the box with me 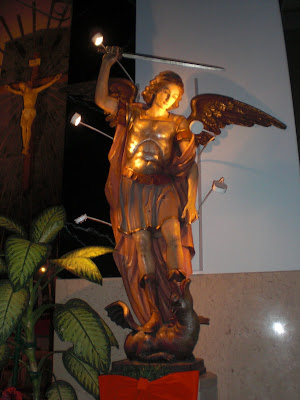 Here is a beautiful Buffalo Christmas angel for everyone. It is not just any angel either. It is St. Michael the Archangel!

I took the picture today when I went to St. Michael's for confession.

I could not help noticing that besides me with my Ugly Betty braces, everyone in line was very good-looking. This is the kind of person who gets into trouble. Speaking of which we were all exhibiting the kind of behavior that insures you a place in the confession line. We were all interacting, Buffalo-style, smiling at each other, chatting here and there.

The Jesuits must have noticed this because you know how at Target, when the checkout line is out of control, they open another one and say, "Can I help the next person over here?" They opened a new confessional! After that things moved a little more quickly.

It is funny to see guys in Bills jackets emerging from the confessional. Only in Buffalo! Perhaps they are confessing shaking the port-o-potty while a fan of the opposing team is in there. That is the kind of sin Bills fans commit.

When I finally entered the box it occurred to me it was the exact same one I was in when I made that dramatic return-to-confession confession. I will tell you this, what a relief it was on this occasion to be able to say, "My last confession was four months ago." Not 20 years ago!

My first sin, not that I am going to subject you to the laundry list I gave the priest, was, "I drink too much wine."

Here is a picture of me drinking wine at Pizza Plant just the other day. 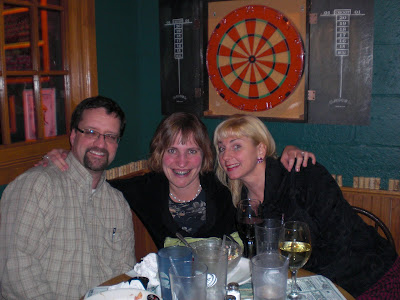 The beautiful blond with me is my friend Michelle. She goes to confession at St. Michael's too! We are St. Michael's girls, are Michelle and I. The Archangel knows us by name. Oh, and you know what, Leonard Pennario knew his way around St. Michael's too. He hit Mass there at least once. I saw it in his diaries.

Back to my confession today. Here is what I loved, the priest completely passed over the wine as if it were of no concern.

In the counseling session that always follows your sins, he skipped it over and went on to other stuff!

I have said it before and I will say it again: I LOVE THE CATHOLIC CHURCH.

I love the Jesuits!!

I came out of that confessional feeling all shiny and new and then I saw they were getting ready for Mass so I stayed for it. The priest announced the Mass was late because there had been so many confessions. He was very happy about that. One thing about St. Michael's, they might be a little gruff about it in the confessional but they always take time to thank the grace of God for bringing you in there. "Let's thank the grace of God for your good confession," was what the priest told me yesterday. These priests are such good men.

After Mass was when I took the picture of the statue up at the top.

Which, I have to say, took a million years. There was this woman praying in front of the statue so I had to wait forever, kneeling in my pew. After a while I found myself growing impatient. Will you stop praying already, I am thinking, so I can take my picture?

Oh no, there's a sin! Impatience at another person's prayer!

I am already working on my next confession!
Posted by Mary Kunz Goldman on December 23, 2009

Mary, thank you for sharing your Catholic stories. I so look forward to your posts. Merry Christmas and Happy Book Publishing in the New Year.

I too look forward to the Catholic stories, especially the ones that have some of that awesome music like 'Rorate Caeli', and some others that I wish I had kept track of now. Just last night, I found something that really touched my heart and soul. It was in Latvian and was Catholic and that is all I know. I did make an mp3 of it though. The translated title seems to mean, 'Holy Spirit'. Thank you, Mary for brightening my little world.

As confession was part of my youth, I think I might tell a priest my sins if he tells me his...

On second thought, naah; I'm following in my father's path. When my siblings and I were kids and we'd talk to him about God, Heaven and Hell, he'd tell us that when he died, he was going to Creep.

"It's five miles below Hell."

Hmm, you confessed to drinking too much wine, but you don't sound really truly sorry about that to me. I wonder if you are, in fact, absolved. (Could that be why the priest glossed over that one?)

Besides, drinking too much wine? That's not a sin. With all you've got going on in your life, it's a necessity.