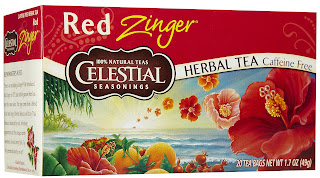 This was a surprise even to me, but I went to Tops and what did I buy? Red Zinger tea!

Remember when I bashed Red Zinger?

Anyway, I had a coupon I was doubling at Tops for their 99 cent coupon doubling special this week. Yikes, there has to be a better way to word that. Well, I take greater care when working on my book.

And I remembered Dave and Red Zinger. I picked up the box and looked at it. The herbs that go into Red Zinger are just so attractive! There is peppermint and licorice and something yummy sounding, Wild Cherry Bark.

Plus I also like Red Zinger's pedigree. It was introduced in 1972. What was Leonard Pennario doing in 1972? Let me check. Ah! He played at the grand opening of Chrysler Hall in Virginia. Also he stopped by Buffalo that year and stayed at the Lord Amherst down the street from my house. Did he drink Red Zinger while he was there? I think not.

It is a bit of an acquired taste, I have to say that. Howard and I drank it with dinner last night and it tastes kind of like hot Kool-Aid. I admire those beardos over at Celestial Seasonings for being able to make it so sweet without any sugar or sweetener. But red wine goes better with dinner than Red Zinger.

Still, it's good, in its Age of Aquarius way. This summer I think I will take the box's advice and try it over ice. 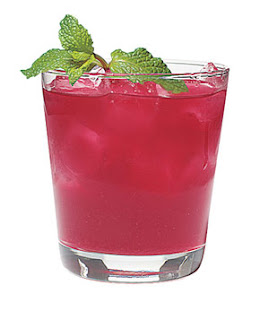 The thing is, when I am working on this book, arranging and rearranging info on Leonard Pennario, I just need something to quaff. If I am not ingesting something I am just not happy.

Hahaha.. looking back on what I wrote a while ago, I read: "Does anyone know anyone who drinks Red Zinger?"