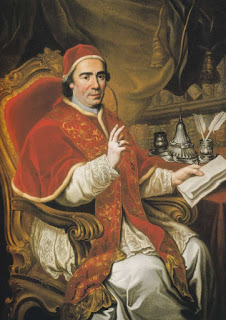 In case the Vatican approaches me, I have been gathering my thoughts as to the next Pope.

A priest whose Web log I follow invites you to vote on what name you think he will take.

It is sort of like voting on the Oscars. There is a difference between what name you would like the next pope to take and predicting what name you think he will in fact take. The pope name game is fascinating because the nerds who are into it take all kinds of medieval and historical and theological things into account.

I am not an expert on any of this but I cannot help thinking of names I would like the pope to take.

1. Clement XV. Because the last Pope Clement, Clement XIV, pictured above, knighted Mozart. And it would be fun to hear people saying "Pope Clement" again after all these years, as Mozart himself must have.

2. Sixtus, because of Sixtus Beckmesser in "The Master Singers of Nuremberg" ... 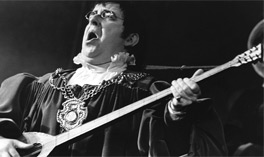 ... one of my favorite characters in all of opera. I am going to start identifying "Die Meistersinger" as they used to decades ago, in English.

Plus the last Pops Sixtus, in the 1500s, was Sixtus V, so our new pope could have the fun of being Sixtus VI. Sixtus the Sixth!

3. Urban IX.  So his assistant could be Sub-Urban.

4. Pius XIII. Because Leonard Pennario met Pius XII and thought the world of him.

Those would all be wonderful names.

I will have to bring my Web log to the new pope's attention!