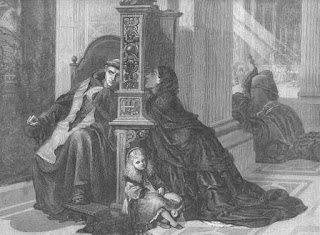 Aiiiee, my confession today was less than great!

I was late getting down to St. Michael's because I went to Zumba and then went video shopping for my mom. But there were still 25 minutes of confessions left. I knelt in the pews for a minute. I put on my, ahem, chapel veil. This is weird and dorky but it has gotten to the point that I do not feel comfortable in church without something on my head. Then I got up and got in line.

And here my problems began.

The line moved too slowly. The priest in the box was taking his time. One guy was in there for, I want to say at least 15 minutes. The reason I can say that is, the woman in front of me recognized me and introduced herself and was asking me if I could do a story on this dance group she is in. I didn't mind, except I felt dorky in my veil -- but my point is, our conversation went on for some time and that is how I know that one guy was in the confessional FOREVER.

I began to worry about the time. There were still two people between me and the booth ... 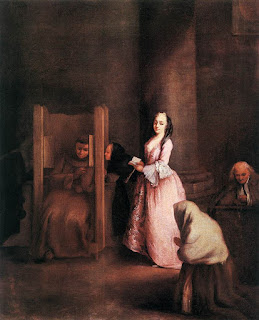 ...  the woman from the dance group and this other stylish woman standing across the way, with a coat and a purse I coveted. Covetousness! Just standing in line I was racking up the sins!

The woman from the dance group went and she was also in there for a long time. Then the woman whose clothes I coveted got her turn. She was more in and out. It must be getting on 2 p.m., I worried. Well, surely the priest would not just leave. Surely he would wait a minute to make sure no one else was there.

Because darned if that door does not open and the priest does not step out. And without even glancing my way, he walked away! He was this old guy in a sweater and he looked as if he had just had it.

I was the only one left. I just stood there not knowing what to do, feeling disappointed and dismayed. It was not exactly this emergency situation but I had made this special trip.

Luckily this being Buffalo other people got involved. This woman across the church called out, "Father!" and finally got him to turn. She pointed at me.

He turns and frowns in my direction. I felt so stupid, standing there in my dorky veil.

"I'll be quick," I said. I said it as a kind of joke but the priest did not smile. He sort of sighed and went back into the booth and shut the door.

I went behind the blue curtain. And this was something I never thought of: It never crossed my mind that I would feel ashamed saying it was a week since my last confession. I wished I could lie and say it had been a year!

I got through it but I felt rushed and ridiculous. Because I am on this weekly regimen my sins sounded silly and unimpressive. There was no discussion about them. And then things got worse.

I was so jangled I forgot my Act of Contrition! 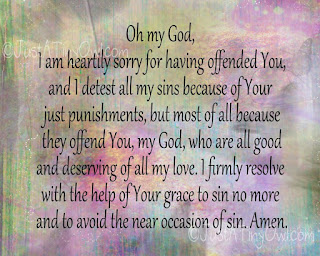 I started out fine ... "O my God, I am heartily sorry for having offended Thee..."

But I stopped when I got to "And I detest all my sins because of ..."

"I'm sorry," I said. "I'm blanking." I was hoping the priest would prompt me but he did not. I took it from the top. I got to the same spot and blanked again. Finally I sort of guessed. "Because of Thy just punishments," I said. Was that right? It did not sound right. How could I have screwed this up? It was like imagining Leonard Pennario screwing up a Chopin waltz. It just does not happen, you know?

I stumbled through the rest of the prayer. The priest gave me my penance -- four Our Fathers and four Hail Marys, by the way, my biggest penance yet, I must point out. Then he said he absolved me of all my sins, in the name of the Father, the Son and the Holy Spirit, and did I want fries with that.

Hahahaa... Sorry, I could not help that!

Long confession short, after that absolution I returned to my pew. The priest came out of the box and walked wordlessly away. I knew exactly where he was going.

He was going backstage to bop on the head whichever priest it is who is going around telling people to come back to confession every week!

Maybe I am part of some Jesuit practical joke!

Oh well. You win some, you lose some. Plus it is not all about making you feel good, you know? You go because you go. Priests are people too. It is what it is. Begin the beguine.

Next week I will toss the confession dice again.

Maybe just to stir the pot a little, I will try a different church!

I would have said: "And I confess that I want to punch you in the nose for giving me attitude."

Bing, hahahaa! I should have given that priest what for!