We did Movie Night tonight at my mom's, for my little niece and nephew. It was a big success!

We showed "Peter Pan," the old version from 1960, I think it is, with Mary Martin. In attendance were my brother George, his two little ones, George Andrew and Barbara, and my mom.

Also in attendance was my corn popper. George said, "It's like 1982!" Which it was. But it was novel to everyone. My mom was gazing at it transfixed, and also looking on, with her arms around my mom, was our Barbara. And George Andrew was also there in the mix, gazing at the popcorn popping.

"Peter Pan" was an adventure. I had never seen it before and neither had George. So all of us were new to it even though we knew the songs.

Right away, when the movie started, I worried. The kids are not used to movies and they were restless and of course hooked right into that Peter Pan was played by a woman. Did I say hooked into? Listen to me!

I had to confront it and get it over with.  I just said, "Yes, you know what, Peter Pan is always played by a woman. They need someone who is athletic and a great singer and dancer."

Then George said to the kids, "Get past it."

And we left it at that.

Secretly I was thinking: This is a disaster.

These kids are going to hate this! It is made for different kids from a different time. When Pennario was a household name, that is when this "Peter Pan" was a hit.

But then things got better.

It was funny, watching the magic of Mary Martin's performance take hold. Our George Andrew, who is 6 or something, he actually forgot he was watching a mature woman. When he looked at her he saw a little boy. And he is a little boy! God love Mary Martin, you know? That is a great artist, who can do that.

There is this one interlude when Peter Pan sings a lullaby that he remembers his mother singing to him before he came to Never Never Land. "Before he left home," Barbara said.

While Peter Pan was singing that lullaby, the Lost Boys were lying on their stomachs, the chins propped up on their hands, listening to him. And our George Andrew, no doubt without thinking, got down on the floor in the same position, looking up at the screen.

And Captain Hook, what a kick. George and I were laughing, who knows what old vaudevillian they got to play him. Whoever he was, he was tremendous. Later I learned he was Cyril Ritchard. I know nothing about actors, forgive me.

Here is Mary Martin and Cyril Ritchard in the studio. It turns out that Hook was a Catholic who went to Mass every day, though there is no word on whether he went to confession once a week. When he died in the '70s, Archbishop Fulton Sheen said his Requiem Mass. 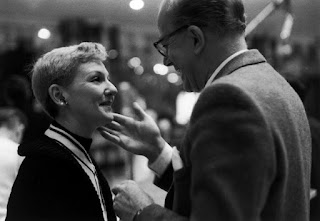 Here he is in action.

Cyril Ritchard also plays Wendy's dad, Mr. Darling. That is like in "Mary Poppins" when Dick van Dyke plays both Bert and Old Mr. Dawes. You get these goofy double-ups. I love that.

At my mom's it was fascinating to see the old software still work, as Howard would put it. To see the kids laughing at Hook and getting teary over Peter Pan and Wendy. Also we all loved the big fake dog, Nana.

"It was Nana's night off," the mother mentions at the beginning, setting the scene. The dog gets a night off! Hahahahahaa! So many of these jokes are lost on kids.

Then the movie had this weepy ending, though, when Peter Pan comes back to find Wendy and Wendy says: "Peter, I'm old. I'm a married woman!"

Peter starts crying. We all started crying. George and me and George Andrew and Barbara.

The only one who was not crying was my mother. She yelled at Peter Pan! She said: "Don't take it so hard!"

But our Movie Night was a success.

We will do it again!