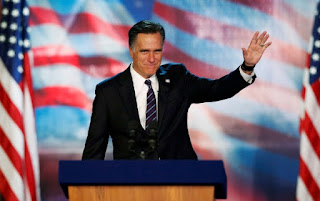 I had to call my mom and break it to her that Mitt had lost!

My mom and I had been watching the results together and thinking he was doing well. I mean, he had a good long list of states, they hadn't gotten yet to the battleground states but we figured that thinking people would vote for him and he would take those states, he would be elected. Alas when I got home I realized it was not so.

Even so, it took me a good 10 minutes to make The Call.

I just did not want to do it!

It must have been just like Mitt Romney getting ready to call Barack Obama. He did not want to make that call and neither did I.

Finally we both did it. I think I made my call first.

"Mom, we'll get through it," I said. "Meanwhile we'll do the pumpkin pie party tomorrow night whatever happens."

The pumpkin pie party was that I was supposed to roast these two pumpkins my little niece and nephew Barbara and George Andrew garbage-picked, and we were going to gather and make pumpkin pie. Which we did! But that is a whole other story.

Anyway, last night I got my mom laughing and both of us agreed we were going to go to bed and not monitor the rest of this mess. I did not exactly keep my part of the deal. Howard told me Romney had won North Carolina and I found myself turning over the pages of the Wall Street Journal again until I found the charts, and then poring over them all over again. If we took Virginia too, then all would not be lost, if then we took Ohio, but Pennsylvania had gone the other way, and...

That was what I had been doing that morning before Howard got up. He teased me that I was like Karl Rove, studying these charts in the pre-dawn darkness.

I wished my dad were around to talk to about all this. I wished Leonard were around. I could only imagine what Pennario would have said about this situation.

Oh well. All over. One good thing about this situation:

I will be able to get more work done!
Posted by Mary Kunz Goldman on November 07, 2012

The 2014 mid-terms
Will be coming up soon---
Who knows, those results
Just might make you swoon!

Bob, my hopes in elections
Always prove vain!
I'll have to play piano --
The only way to stay sane!

I need to acquire a piano---
It sounds like a lot of fun---
But first a home security upgrade:
Alarms, window bars, and a gun!

The way I played Chopin
With errors today,
I think even burglars
would stay far away!

Hahahaa I'm a poet and I know it!