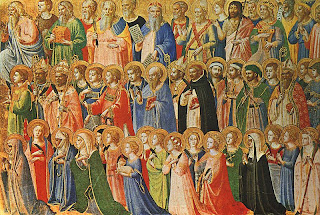 Last night, I observed Hallowe'en as someone might have in the Middle Ages. There was a Tridentine Mass at Our Lady Help of Christians -- the Batt church, remember? -- so I went.

I wrote about it beforehand on Facebook. I wrote that I should be out partying but that going to a Tridentine Mass at a 150-year-old chapel and wearing a black lace veil was just too cool.

And it was funny, the responses I got! Everyone was really enthusiastic. But though I wrote that I had extra estate sale mantillas, anyone could come along with me, nobody did. Well, it was Hallowe'en night. That was the whole thrill of it but also a lot of people had party plans.

Some of my Facebook friends wrote regrets. The one that really gave me pause was: "I would go, but I am already going to the Witches Ball."

Hahahaaa! Is that opposite or what?

It is funny, until a few years ago when I started going to the Latin Mass, I routinely forgot that All Saints Day was a holy day, that you were supposed to go to Mass. It was Halloween when, five years ago -- yikes --  I flew to California, on Hallowe'en, to see Leonard Pennario. It did not occur to me to go to church. I just did not think.

Anyway. I enjoyed my Hallowe'en Mass last night. This chapel gives me such a wonderful feeling. The candles. The sweet statues of the saints, looking down at you. Here is a picture I took last week of St. Isaac Jogues, looking down at me. 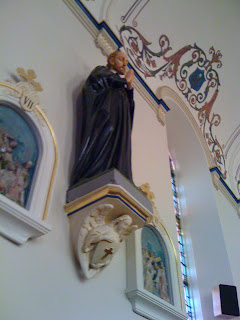 And how is this for a Hallowe'en experience: One very cool friend -- he's not even Catholic, go figure -- did join me for Mass, and when it was over we were talking inside the church for a little while, and most of the other people left, and so we were leaving too. And the moment that we were genuflecting after leaving the pews, the church was plunged into complete darkness!

Someone must have hit the light switch!

After a few moments the light went on again.

But it was thrilling while it lasted!