High on the hog 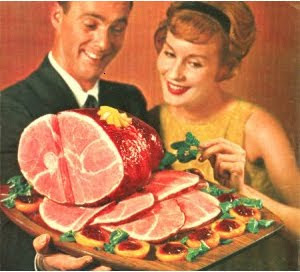 Over the weekend I went to Albrecht Discount and I bought a ham. It could not be helped! There were these beautiful hams sitting there just as if it were Easter. And they were 99 cents a pound, a magnificent thing.

So here I am with this ham in the fridge. Yesterday it occurred to me to check to make sure it was cooked. You always have to do that because once, I remember, my Easter ham was not cooked. Surprise, surprise! Luckily I found out in time so I could cook it. If you have an uncooked ham it is not the end of the world but you have to stick it in the oven for a few hours.

Well, guess what, this ham was not cooked! Instead of "Fully Cooked" it says: "Ready To Cook."

No. 1, the house took on this beautiful aroma of ham roasting. These are hectic days and I do not often have this pleasure, of smelling something cooking slowly in the oven.

No. 2, I diced up some of the ham and made Pasta Fagioli with Ham, Mushrooms and Herbs" from Bon Appetit One-Dish Meals, this great cookbook I bought at a library sale. When I get a ham I like to spread it around, dicing it into little pieces and enjoying it this way and that way.

No. 3, while the ham was roasting I was working on my Pennario project. And I found a recording of his I had no idea existed. It is in a university collection which, this very day I will begin to bug them.

Not to ham it up but this is a great discovery for me and for music. Slow cooking is great for this kind of thing, you know?

Put something in the oven and you stay right there in the house.

Things get done!
Posted by Mary Kunz Goldman on September 24, 2012