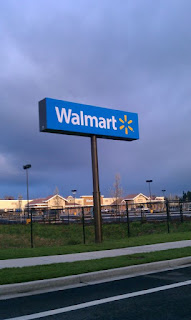 Tonight I went to Walmart. Ha, ha! Just reading that sentence reminds me of something.

A few years ago my friend Toni at work had Swiss friends visiting her. This family, all they wanted to do while in town was go to Walmart. They went once and then they went again. And again.

We ran something in the paper, in the Buzz column, about it, and the headline was Swiss Family Walmart.

I still laugh about that headline! It was just so silly.

Well, tonight I found myself walking in the footsteps of Swiss Family Walmart. And fascinating it was! I have not been in a Walmart in I do not know how long. Too long!

There was a huge bin of off-brand CDs of everything from George Jones to Mozart. I checked the Mozart over really quick to see if it was one of those labels that pirate Leonard Pennario but it was all people I had not heard of.

I ogled a Hula Hoop but in the end was too cheap to pay $8.

I bought Celestial Seasonings Peppermint Tea which I am drinking right now. No other tea measures up to this stuff.

What else? The world waits.

OK, I finally caved and bought a new garbage can for the kitchen to make up for the one Larry broke. He stomped on the foot pedal too hard and broke it.

That purchase hurt, I have to say. There is nothing fun, nothing, about buying a kitchen garbage can. Especially when you have to buy it because the old one, that you had to shell out for before, is broken. Also the garbage can aisle was a mess, cans and covers lying everywhere. My friend Lizzie who was with me was saying that this Walmart was just trashed. People just go everywhere and break things.

When we got out it was warm and there was a beautiful crescent moon. I am telling you, the parking lot was full.

Perhaps you wondered where people went of a fine soft evening like this. The answer is Walmart! There was even a stabbing in their lot this afternoon.

But that did not stop me from taking a stab at Walmart. You know me, I do not let fear get in the way of enjoying life.

And all the cheap things it has to offer!