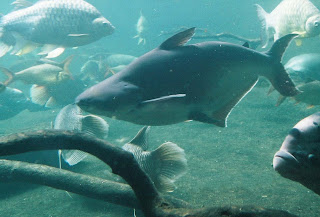 Yesterday I wrote about Swai fish. Today I must needs write about it again.

I am enamored of the fish's Wikipedia page!

I love how it refers to aquaria. One aquarium, two aquaria. It is not altogether consistent on this but I love the page for making the effort. Pennario would love it, with his correct grammar.

Then there is this paragraph:

They have very poor eyesight, so any foreign movement they detect outside of their habitat, they will see as an utter threat. If stressed, their first instinct is to flee, and such a blind dash can result in injuries, especially in an aquarium environment. These flights may be terminated by the fish sinking to the bottom, where it may lie on its side or back until it recovers.[5]

If stressed, the Swai flees!

I would not like running into one in the ocean but that is one great name.

That is an iridescent shark at the top of this page. The name makes me think of when you get to the bottom of the ocean and the fish are lit by little fluorescent lights.

I found this letter on a board.... hahahahaha...

Iridescent shark... what to do??


Like a complete idiot and a newbie, I bought an 1.5 inch iridescent shark a while back from a local pet store. The associate there assured me, "It'll only grow a couple inches more... a good tempered fish... great for the community aquarium...." Three years and 4 inches later my iridescent shark lives in my 20 gal along with a couple of neon tetras (there used to be nine... he probably ate the rest).

My dilemma is this... Should I just keep my shark or give it away to another lfs (a different, very family-owned nice one)? I'm going away to college in another year, and I doubt my parents would be able to care for him... Don't get me wrong, I love my "Big Phish" as I affectionately call him, he's good tempered and very beautiful but also rather hyper and he just keeps growing!!