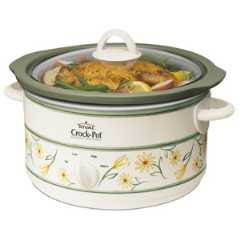 When I am through with my book on Leonard Pennario I might just have to write a Crock Pot cookbook.

It is so hard to find decent Crock Pot recipes!

Just now I was preparing to put a chicken in the crock. A whole chicken, from Tops, 88 cents a pound, that I am cooking up for my mom. I wanted to have a little fun, do something distinctive with it, not just put it in the pot and pour wine over it, whatever.

I looked on the Internet but most cooking Web logs drive me crazy. The pictures are yuchy ... 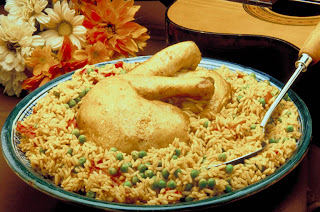 ... and the writers are too wordy.


Ha, ha! Bitchin' in the kitchen. Monday mornings are for griping!

The Crock Pot cookbooks I have are pathetic too. This one book I have is typical. It comes from Britain which, a lot of cookbooks with beautiful pictures come from Britain. And often they have great recipes too. People tell you British food is bad but that is wrong. It is great.

The trouble is, though, this Crock Pot cookbook is so fussy it is useless. I keep wanting to throw it out or tear it up.


On the cover it says: "Over 200 one-pot dishes for no-fuss preparation.."


The writer -- her name is Catherine Atkinson, I name names -- almost always starts by making you brown something in a skillet on the stove. Next you have to transfer whatever you were cooking into a bowl, and brown something else. Then you de-glaze the pan, then add other stuff, then cook until it is reduced, or whatever.

Finally you transfer it all laboriously to the Crock Pot and it cooks, say, on high for one hour and then on low for two hours.

What in the world, you know?

How does this make my life easier?

Obviously whoever wrote this book does not understand the strengths and weaknesses of the Crock Pot.

Long story short, finally I settled on this, kind of a basic spice rub, nothing special.

But at least I am cooking.

Whew Mary. I thought by your title that you meant your Crock Pot was DOWN as in not working. Holy cow that is almost as bad as running out of ink on a Sunday evening. Glad it was just my anxiety reading your title wrong. Happy Crockin'.

Whew Mary. I thought by your title that you meant your Crock Pot was DOWN as in not working. Holy cow that is almost as bad as running out of ink on a Sunday evening. Glad it was just my anxiety reading your title wrong. Happy Crockin'.

Thank you, Unknown! The Crock Pot is up and bubbling!