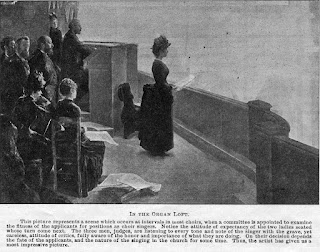 Today I saw the Memphis Belle one last time. It flew over St. Anthony of Padua Church downtown while a bunch of us were standing around after Mass talking. We all looked up and admired it.

I am kind of going to miss the Memphis Belle!

Hilarious morning at church I have to say. I was just sleepy! Other people were too and we were laughing about it later. It was warm in the organ loft and a fan was oscillating. There is nothing like church in the hot summer, you know? It is this special feeling. It was exactly the same when I was a kid.

But I never quite fell asleep because every few minutes someone would rouse me and I would be yanked to my feet and Latin would be held in front of me, and I had to sing.

That is a photo of me at the top of this post!

It is perhaps no surprise that things were not perfect. For instance there was "O Esca Viatorum." Looking it up I see it is by Haydn. Do I recognize quality when I hear it or what? We have sung this before and although it was listed in the book as being by "Traditional," I remember telling someone that whoever wrote it was good. I said, "If someone told me this was by Mozart, I would believe it."

Listen and judge. (This is some other choir, not us at St. Anthony's.)

But back to St. Anthony's. As Richard Nixon said, mistakes were made.

We hit verse 3 of "O Esca Viatorum" and everyone just stopped. Josephine, the organist, kept playing. She looked at us and sort of mouthed, "What??"

A few minutes later there was a whispered investigation into the disaster.

"Why did you all stop singing?"

Mike, leading the guys: "We just didn't know we were supposed to sing the next verse."

Me, unofficially whispering for the women: "The organ just sounded quiet. We didn't know we were supposed to come in."

And Josephine is looking at us as if to say, you idiots.

Life in an organ loft, hilarious. It always cracks me up, how often you hear whispers like, "What happened there?" or, on a brighter note, "That wasn't too bad."

It is another thing that makes me affectionate about St. Anthony's, aside from the Pennario connections.

My Sunday mornings are so memorable!