Who gives a flying Wallenda? 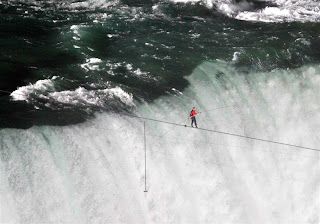 I did not think I would but I did.

Howard and I watched Nik Wallenda walk the walk over Niagara Falls on the television at the Hyatt along with Jackie Jocko the great lounge pianist. At first we were all scornful but then we got caught up in it.

You could not help it! Wallenda was so likeable for one thing. The praying was what won Jocko over. Before the walk Jocko was saying, "I hope he falls in the Falls." But then Jocko was totally won over. "Did you hear that?" he said to us. "He thanked Jesus!"

That is a very daring thing to do, in front of thousands! Well, Wallenda is a daredevil.

That is a great old word, daredevil. And a great name, Wallenda. I had no desire to join the huge crowds in Niagara Falls but even when I was scorning this whole thing, I liked the thought that the name Wallenda was once again on everyone's lips.

"Who gives a Flying Wallenda?" I had a long-ago roommate who used to say that.

That name was once legend and it is nice to think it might be again.

If you have never read up on the Flying Wallendas, they are a great old German circus family and their name in German, "Die Fliegende Wallendas," was a play on Wagner's opera "Der Fliegende Hollander," "The Flying Dutchman." A fine excuse to listen to the wonderful overture for this haunting and atmospheric opera.

Karl Wallenda was born in Magdeburg, Germany in 1905. They talked on the television last night about how he fell to his death from a wire. So sad. I do not remember hearing that he was 73 when he made that last walk. Perhaps at 73 you are tempting fate more than normally on a high wire, but that is the kind of family this is.

Last night at the Hyatt it was fun to watch the walk because the staff was lined up behind the bar, watching, and at the table where I was watching were Howard and our friend Jim Corbran the automotive columnist at Artvoice, and the magician Bob Davis. We kept expecting Bob Davis to materialize on the wire behind Wallenda! All of us as we watched were nervously eating Jocko's trademark jelly beans.

Bob Davis who knows about thins like this said that with the tether Wallenda probably would not die if he fell, but he could be hurt. It occurred to me that he also stood to make a big fool of himself, so there is a big risk there too.

I really did want him tethered, I have to say that. The thought of a man dying like that, I could not stand to watch it. I did not turn toward the TV when they ran footage of Karl Wallenda falling. I did not want to see that.

For now, kudos to Nik Wallenda, the Leonard Pennario of high wire artists.

He walked the line!