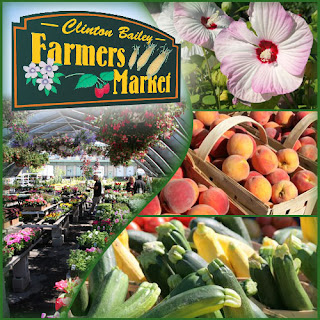 Today I went to the Clinton-Bailey Market for the first time this season. It was like a medieval town square with everyone talking about the Wallenda wire-walk yesterday.

Everyone loved him! And there were a lot of people saying that like me they were not into it at first, but then they tuned in and were hooked.

Among other people I ran into my friend Airborne Eddy who said, "What's the big deal about the tether? A lot of guys I know have been tethered to a ball and chain for years."

The farmers were laughing too.

Anyway, it was funny, this feeling of community, strangers all discussing this event, and it gave me a sense of being back in time. Tightrope walking must go back to the ancient Egyptians, you know?

It was warm in the sun and everyone was talking kind of slowly and lazily. People liked Nik Wallenda for praying. That was one thing I determined at the Clinton-Bailey Market. Everyone thought he was a darling man and that was what won them over, more so than being impressed by his stunt.

Although we were agreeing that it was amazing, the thought of him walking with the wind and the mist. Not being able to see, not knowing where anything was. Imagine that. And here you are trying to put one foot in front of another.

We also agreed that there was a moment when we thought he was going to fall and it seemed as if he were a little bit worried.

Heavy conversation, over the strawberries and Swiss chard!

Tomorrow in addition to my normal Leonard Pennario challenges I face a new challenge: what to do with the vegetables, the many many vegetables, I bought at the Clinton-Bailey Market including a big, big bag of peas. Not the sugar-snap kind, the kind that you have to shell and then do God knows what with. I bargained like a Moroccan and got them at a good rate and now, the question is what is next.

What to do with those peas?