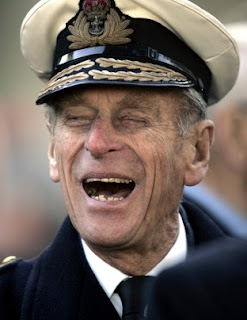 Aiiieee, last night my mother asked me again how Prince Philip, pictured above, was doing. And again I had to fib.

"I read he's much better," I said confidently.

Only just now did I get around to Googling around and seeing what the situation is.

Thank heavens, lo and behold it seems I am right.

My mom and I were discussing if perhaps Philip might have played sick to have avoided that crummy pop concert. Sir Paul McCartney, Sir Elton John. I mean really.

Give me Sir Edward Elgar, back from when knights were knights and mustaches were mustaches.

Isn't that amazing? I love that video and have been posting it everywhere including on my other Web log and on the Gusto Web log at The Buffalo News. And I made Howard watch it. Last night past midnight Howard wants to go to bed and I am sitting there making him watch Sir Edward Elgar.

"Look, Howard. He wrote this thing. Look how they help him off with his coat. Listen to what he says to the orchestra."

Ha, ha! It is no picnic being married to me!

If it is not Leonard Pennario it is something else!

But still. This is fascinating. If you are interested in more time travel, do check out my other Web log today, in which we get to glimpse Queen Victoria, King Edward VII and Kaiser Wilhelm II, among other long-dead people, living and breathing and walking around, along with more Elgar, of course.

When royalty was royalty.

And music was music.

I find your Pennario (of whom I had not previously heard) obsession fascinating. For a while, I had a Bjorling obsession, then Heifetz. then Glenn Gould. I will listen to Pennario. I am also a pianist.