The timer is ticking 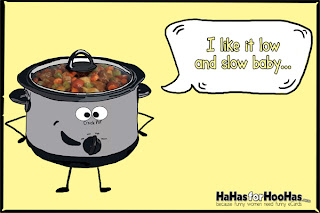 An amazing thing has happened to my cooking capabilities. I was able to score a Crock Pot with a timer!

I am excited about this!! I have wanted one of these for a while. I found this one second hand for $15. It looks just like this one .... 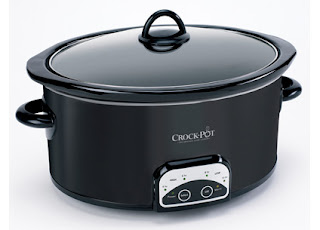 ... only it is white, not black. Which is fine with me. As Michael Jackson sang, it don't matter if you're black or white. Wow, looking at the Web log from which I stole this picture, I see that these things normally cost $40. "A bargain," writes the Web logger. An even bigger bargain for $15!

This Crock Pot I acquired does not look as if it was ever used. It is pristine in a way that your Crock Pots never are after you have used them. Unless the person who had this one is the greatest scourer in the world.

You can set it for four, eight, 10 or 12 hours. I have not used it yet but I have been admiring it and plugging it in and pushing its buttons. This is funny, if you have ever explored Goodwill's Small Electrics department, they tape on these hilarious notes. All in capital letters, it says: "THIS IS 'FINAL SALE.' THIS ITEM WAS TESTED BY PLUGING IT IN..."

After reading that word "pluging" I just cannot go any further.

I love that too much!

Now I must needs find a good project with which to christen the crock. I would like to find something that would have been off limits to me before because I would not be there when the dish finished cooking.