Look to the rainbow

Today the ax fell on St. Ann's. That is the beautiful church on Buffalo's East Side where I have been privileged to ring the bells in the past few years. Not only the time I just linked to but this time too. And other times.

My friend Chris Byrd at Broadway-Fillmore Alive posted the video above of the bells of St. Ann's ringing this morning, perhaps for the last time.

The actual announcement is that the diocese has suspended all activities at the church. It is a shame. St. Ann's is a magnificent church from the 19th century in what is now one of the most desperate parts of the city. It has been dodging bullets for a few years now -- from the bishop, I mean, not from the neighborhood.

You can hear the bells in Chris' video. They are huge and dignified and they have names, is another thing. The big bell is St. Ann. A smaller bell is her husband, St. Joachim. Ha, ha! You could kind of sense the immigrants who somehow built this Gothic masterpiece laughing about that.

If you are not Catholic and do not know these things, St. Ann and St. Joachim were the parents of Mary, the Blessed Mother. In other words they were Jesus' grandparents.

There are five bells, I think. I forget the other names but the littlest one is called the Angel of God.

I did not normally go to Mass at St. Ann's. I would have liked to but I love the Tridentine Mass, the Mass in the Extraordinary Form, to use a phrase I love. I go to St. Anthony's because that is where they have the Tridentine Mass. OK, also because it was Leonard Pennario's family's church when he was born. That too. But also I just like my Mass the traditional way.

A couple times when there was a Tridentine Mass at St. Ann's I went there.

Well, it ain't over till it's over, as we say at Bills and Sabres games. One thing gives me hope.

Once when I rang the bells at St. Ann's,  it was a very dramatic day with clouds rolling across downtown. I took this masterful picture from the bell tower. 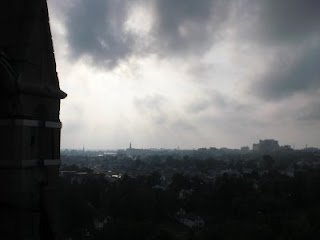 And that day, that evening, we were all talking about the St. Ann's troubles and a rainbow appeared over the tower where we were.

It was whispered that the rainbow was a sign from St. Ann that she was watching.

At the time we decided, a few of us, that it was best not to write about it because no one wanted to antagonize the bishop. We were sort of hoping that goodness would prevail in his heart and he would just kind of look the other way and leave St. Ann's. I still hope against hope things could work out.

Pretty cool. I have a Steinway Piano at home. I saw this store. Also, I wanted to include this store on our directory for fine pianos. We will list it on both our web sites: http://www.conocopianolamps.com/the-right-lamp/ and http://www.conocopianolamps.com/history-of-piano-lamp/ We also have another place to put the directory which is http://www.conocolighting.com This piano light store is highly recommend as they also carry grand piano lamp. I visit two piano lamp places and found these to be the best. www.conocolighting.com

I know, it cracked me up too! I think this same place spammed me another time, saying, "It's wonderful for kids to take piano lessons. They should have a good piano lamp..." etc. You almost have to admire this kind of artistry!