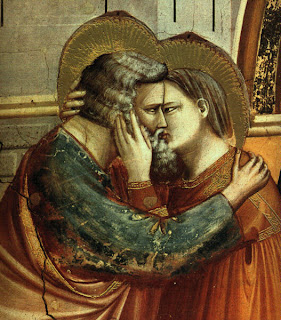 Yesterday was the third day of the Triduum of the Feast of St. Ann and St. Joachim so my friend Jane and her friend Victor and our friend Airborne Eddy and I all went to Mass at St. Ann's and then we went to the Swannie House and had a feast of chicken wings. Which, I never eat wings! I do not know what got into me.

For a while we were at the bar inside at the Swannie where it was fun and noisy and we got into conversations with fellow patrons. Eddy was sharing his memories of working with Shane Brother Shane, the deejay who visited Howard and me a few weeks ago. Eddy said Shane used to drink beer and tomato juice. He seemed to recall the drink was called a Red Eye.

Eddy said there was never another human being in the history of the world who drank that drink. Shane is the only one! A poll of the people at the bar suggested that was true. It is fun to think of matters like this having been discussed for well over a century at this very bar. I wonder if Leonard Pennario ever had a drink there! I would imagine he did.

After that we went out on the patio and sat there for a couple of hours. I drank the Swannie House red wine. Eddy sipped vodka. Jane drank a vodka tonic and Victor had beer. And we ate those wings. The patio of the Swannie is beautiful, with trellises and trees overhead. The moon was full. The best thing were the sounds you hear. It is in such an industrial area with factories surrounding it. And right outside the doorway is the Buffalo River and that big glorious bridge. When I was walking in I took this picture. 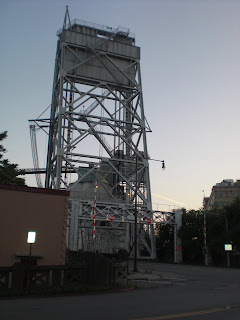 Trucks kept trundling over the bridge. We heard what we thought was a boat passing on the river. Jane thought it was our fireboat, the Cotter. Then we heard a bell clanging, on and on. It sounded like one of the trolleys but we were not near the trolleys. Now I think it was the bridge doing something.

After finishing up those wings Eddy led us down to the river and we stood around for a while on a rickety, rocking dock, looking up at the moon and the grain elevators and listening to the water. I took this picture. 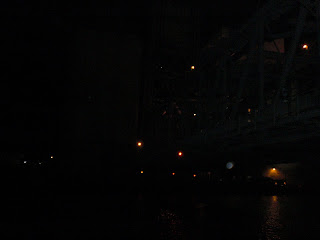 In this picture you can see the full moon! 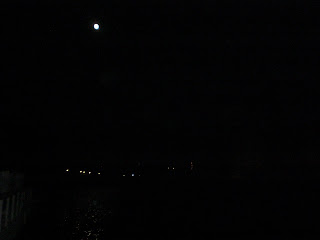 St. Ann and St. Joachim were the parents of the Blessed Virgin Mary. At the top of this post is a sweet picture of them kissing!

Here are two pictures I took at Mass at St. Ann's. It is an incredible church and my grandparents were married there. 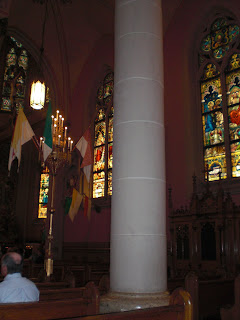 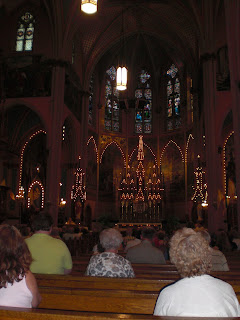 Now that is enough woolgathering.

Beer and tomato juice used to be a staple back in my drinking days. It was used when I was too sick from drinking to keep anything else down. The breakfast of champions!