Our friend in Guyana 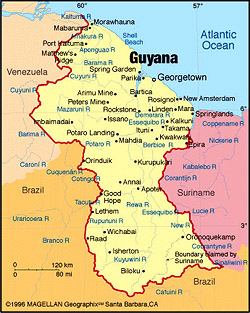 This one friend of mine is in Guyana on vacation and before she left, I have to admit it, I initiated with her the most sophomoric conversation.

"Are you going to see the, ahem, compound?" I asked.

I was such a pest!

Anyway. I forgot about my compound remarks the way I forget about every stupid thing that I say. Until today at the gym when I ran into a mutual friend.

She said she had teased our Guyana-bound friend mercilessly too! And she was more out of bounds than I was.

She said: "If they give you any Kool-Aid on the plane there, say no."

Like me, she asked our buddy if she was going to go visit the, ahem, compound, and was told no.

Our friend told her: "It is all forested over."

"But come on!" she said. "Look around. There's probably a paper cup or something somewhere on the ground."

We are so awful!

It is strange to look back on that whole Jonestown tragedy. I remember it kind of dimly from when I was a kid. My brother George remembered more about it. He remembered that a congressman had flown in to investigate, and was shot dead trying to leave.

Imagine, knowing in your last couple of minutes that you have run up against evil like that.

Reading up on what happened I learned a few things. One was that the Jonestown people moved there to get away from American capitalism. Now they would call themselves Occupy Guyana! Another was that Guyana is in South America. I do not think I could have told you where Guyana was.

One weird thing is that the incident lives on in the phrase "drinking the Kool-Aid." If someone drinks the ...

... it means he has swallowed something nefarious.

Kool-Aid must hate that!! Especially since according to Wikipedia -- a long and lurid and fascinating account -- it was not even Kool-Aid, it was Flavor Aid. I remember Flavor Aid from when I was a kid. It was kind of a cheap knockoff. You had to provide your own sugar, I remember. My parents hated that.

Guyana is one of the few places where Leonard Pennario did not play, at least not to my knowledge. I believe he went his whole life without seeing the place.

Email ThisBlogThis!Share to TwitterShare to FacebookShare to Pinterest
Labels: Travel